Diary of a Wimpy Kid

Red Dragon Island
Wimpy Wonderland Island was the 18th island on Poptropica. It was released on March 14, 2011 for members.

When you land on the Island in Main Street, you will spot Greg Heffley. Talk to him and he will tell you his little brother, Manny Heffley, is missing. You ask him where to look, and he says that you should go back to the house to look, and the two of you run to Surrey Street. You enter the house and go upstairs. You will see an address book on the nightstand in the master bedroom. Pick it up. You will see that Greg's grandfather lives in Leisure Towers, room 33C. Go into Manny's room, and you will see an open window. Go through, and you will end up on the roof, and you will see tiny footprints. They're Manny's! Follow them, and they will lead you to Rowley Jefferson's house. But something doesn't look right...

Let's Get Ready To Rumble!

You discover that someone stole Rowley's rumble bike! You ask him who, and he says it was probably one of the Whirley Street Kids! You ask him which way they went, and he says that there are rumble bike tracks going up the hill. Suddenly, someone comes down the hill on the rumble bike... and that someone is Manny! He rides down the hill and knocks you out for a few seconds. You get up, and Rowley tells you to go get him. So you head on to Main Street. You see some teens hanging out by the Fast Mart, and you wonder what on Poptropica is going on. You investigate and go inside the store. The manager is mad because the teens are driving away all his business, but you can't help him right now, so you decide to leave and come back when you have a solution. You go outside and just avoid the teenagers listening to the Classic Rock music. Then you see the rumble bike, which means Manny can't have gone far. Better yet, run into the rumble bike and you receive it in your inventory and you can ride it around wherever you want!

Now you should see Manny, who jumps up onto the branch of a tree. Jump on the branch, and he will jump onto another one. Keep doing this until you get to the top branch. Manny will run right off. That can't be good! Run after him, and you will fall too. You'll land in Billy's crushed snowman. Take the carrot. Now it would be a good idea to run! Then head right until you reach the school, There you will see Manny jumping up into school.

You see Manny running into the school. Run toward the tree at the right of the school, and get the Combo. Push the trash can onto the left side of the see-saw, and jump off the school onto the other end to launch the can. Push it toward the trash-can underneath the window Manny jumped into. Jump into the school using the can as a step stool. When you're inside the school, run towards the end of the hallway. You will see Manny jumping down from the second floor and running out the main school doors. Run towards the lockers on the first floor and click on the locker five spaces away from the locker with a cut lock towards the right. Spin in the combo and the locker will open and you will get the Twisted Wizard Game guide. Get out of the school.

Go to Leisure towers and jump into the window on the highest floor to the far right. A mini-game will start where you have to work your way up the tower while avoiding windows being opened by some old people. Once you reach the top, click on the window 33C, where Greg's Grandfather lives. When inside, you will see Grandpa is asleep so push against his chair by clicking on it which will wake him and go talk to him asking where Manny is. He will say he'll tell you over lunch and another mini-game will start where you have to finish the watercress salad without getting full. To win this, every time your poptropican takes a bite, click repeatedly so to stop the diagram of your stomach shown from filling up. Once you beat the game, Greg's Grandfather will tell you he sees Manny in front of Leisure Towers from the security camera on TV. You will then see Manny riding on a scooter around the place. Get out of Leisure Towers and Manny will be gone. Go to Whirley Street and dodge the snowballs until you make it far enough to get the snow shovel. Get out of Whirley Street.

Go to Greg's house. He'll be in front of the TV and will ask you to help him defeat the game of Twisted Wizard. He will unlock cheats and you will play. Click on the wizard first to allow Easy Mode and play the game. Beat it and Greg will thank you and ask you to return the game to Rowley. Run up to Rowley's house and jump on the car. It will set off its alarm. Immediately, run and hide behind the bush to the left that is next to the door. Rowley's Dad will come out to turn it off. Run into the door. Give Rowley the game back and he will give you a Joshie Fan Club Membership Card. Go back to Greg's house and go to the closed door to the left. open it using the card and access the power box. Turn off the switch for Rodrick's room. Rodrick will come out of his room. Go into his room and grab the dog bowl. Go out of the house to the garage which will now be unblocked. Grab the leaf blower. Blow the snowman outside with the leaf blower and you'll find that the snowman was Fregley. He'll give you a bingo troll.

Go to Grandma's House. Talk to Greg's Grandma. She'll ask you to shovel her driveway to look for Manny. A short mini-game starts when you go outside and use the shovel where you have to shovel up all the snow from the driveway before you get frostbite. Once you are done, Greg's Grandma will go catch the early bird bingo in Leisure Towers. Go to Leisure Towers and play Bingo. When you win you'll get a Soothing Sounds Classical Music CD. Go to the Fast Mart. Insert the CD into the CD player and the teens will go away. You'll get a bottle of wiper fluid from the manager.

Go to the school area. There you will see a Snowplow Driver. Talk to him and yet another mini-game will start where you have to get the right amount of wiper fluid into a cup using the dog bowl and Wiper Fluid jug. Get the right amount and the Snowplow Driver will go to the Fast Mart for coffee. Go to Greg's house and open the curtains. Greg will stop playing his game and will go find Manny. Go outside and you will see Manny driving the snow plow. Go to Grandma's street and go inside the Quick-Spin Laundromat now that the snow has cleared away. There you will find Manny with his blanket. Greg will come and thank you then you will go to Surrey Street. The Whirley Street Kids will be there. Help Greg push the snowball down the hill to stop them. Then the last mini-game will start where you are sledding back to Greg's house. When you finish sledding, Greg's mom will arrive and Greg thanks you for bailing him out and gives you the Island Medallion. Congrats! 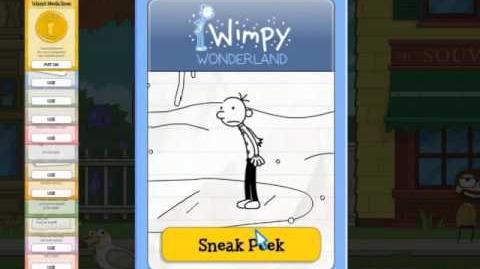 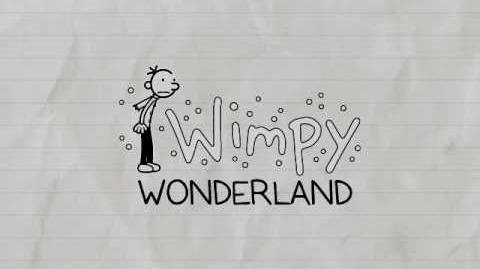 Retrieved from "https://poptropica.fandom.com/wiki/Wimpy_Wonderland_Island?oldid=122747"
Community content is available under CC-BY-SA unless otherwise noted.