Wimpy Wonderland Island
Wild West Island was the 17th island on Poptropica. It was released on February 14, 2011 for members and March 11, 2011 for everyone.

First, go to Wild West Island on the map. You'll land on Main Street. Then you'll see a girl riding a horse. Talk to her and she'll tell you that there is a message to be delivered to Marshal Flint Taylor. We'll get back to her later. Go all the way to the right and talk to the guy with the angry horse (his name's Elmer) next to him. He'll say that the horse is untamable, and you ask to try and tame him.

In the game, you have to try and keep on the horse without him bucking you (throwing you off). This is relatively easy. Just move the mouse back and forth and try to keep near to the moving white cursor. Once that's done the horse magically becomes tamed and you can ride him. (You can dismount at any time, just like the machine in Steamworks Island) He will also give you a horse whistle to call your horse. Go back to the Pony Express Girl and she'll give you her message. Leave town on either side.

Ride your horse (open the map on the top right-hand corner) to the town on the right, Diamond Plains. (It's like the jeep in Cryptids Island) Tip: Your horse can jump over fences and sand dunes, go through water and ride on railway tracks, but it can't go through the reddish-brown rocks.

In Diamond Plains, go to the Marshall's Office near the left. The man inside may look like the Marshall in the picture above the door, but he's actually just an assistant. He tells you to check the saloon. Go outside and go to another map (What a big town!) on the right to find the saloon. Inside the saloon, there are two men sitting at a table. Take note of the one that's asleep. Ask the woman about the Marshall. She'll say that she can't tell you. Then go to the right of the saloon where the two men are spitting into a bucket. Ask them about the Marshall. They'll tell you that they know where he is, and will tell you if you can beat them at spitting gum.

This game will need you to try several times, but here's a strategy to use. Aim your arrow high up (but not vertically up) and raise the meter to about half. There is a trail of spit (gross!) that can help serve as an indicator.

After you win the game, the man will tell you where the Marshall is. It's the sleeping guy! Talk to him and read out the message. The Marshall will say he can't help, but gives you his badge. Put it on and go back to the Main Street. There is a camera man who will take your picture. Then go to the Office. The Deputy gives you the pea-shooter. Then the El Mustachio gang comes in, and he tells you to go catch them. 2 of the girls you see are from Dos Cactos. Chase after them and they'll get away.

Go to the casino in Dos Cactos, and win at Slap Jack. It's a rather simple game. All you have to do is deal a card every turn. When a jack is played, you have to be the first to click it. Then you will get every card in the pile. If you slap the wrong card, you have to give up your cards to the person who dealed the card. You can actually pretend to put your jack in the pile by holding into it and bringing it close to the pile. Be warned, other players can do that too!

A man will tell you he has no money, but he'll give you a map. He says that there's gold hidden there. Next, go to Rock Ridge and when you come (on the left) you'll see a kid and many cows around her. Then, she'll tell to you that she lost one cow and you must help her. She gives you the lasso and then you should go out to the map. Then, look for the tracks of animal footprints (they are near where you were when you left). When you see the cow, it'll start running. Catch it by your lasso (spacebar) and bring the cow to the ranch. When you are going from where you got the cow to the ranch, don't run too fast because the line might snap and you'll have to catch the cow all over again. Then, go back to Rock Ridge and talk to the kid with the cows. She will give you an old saddle (and she'll also ask you for help one more time, and you should do that if you want to get a rattlesnake wrangler). Then, go to the Dusty Gulch again and go to the Trading Post building, by the Common Room. There, you will talk to the owner and exchange the old saddle for the gold pan.

Then get to that place on the map, and click to the river. After getting the gold nugget, go to Rock Ridge there will be a guy with a golden monocle and a bandit. You see the how bandit drinks the potion and become invisible. Then he'll run away. You must ask the guy who sold the bandit the invisible potion for a potion. He will tell you that he's sure you don't have money or gold for paying. Use the gold nugget, and he will give you all the potions.

Equip the pea shooter. Go up to the coal mine on top of all the buildings and shoot the key to it off of the canary. Collect the key and enter the mine. Go to the far end of the tunnel and hop into the cart. A mini-game will then start. In this game, you have to shoot the red targets as you go down the rails to turn them green and prevent you from falling off track. You can shoot the bats too if you want. After beating the game, you will end up in a small area. Climb up the rocks and get the blue tulip. The area will then collapse. Once the screen clears, climb up the rope and out of the mine.

Leave the town and go back to Dos Cactos. Talk to the guy with the huge head and give him the blue tulip. He will give you a scrap of paper which is half of a map to the Mustachio Gang's hideout. Go to the far left and talk to the man in white and enter the contest. In this game, you will go against different people. The object is to shoot the most targets and earn the most points. Reload if needed. Tip: to always hit the target, aim just above it. After beating the game, you will receive the spud gun.

Go back to the Trading Post in Dusty Gulch again and trade the gold pan for the oil can. Leave and go to Diamond Plains. Over there, climb the giant ladder next to the office and enter the clock tower construction site. Any time you see a pulley, click it to let beams fall to let you cross. Try to avoid loose boards. Climb down the boards and fall down the loose one. Push the crate over to the ladder and hop onto it, then climb the ladder. Make your way across until you reach the clock gears. Using the oil can, oil the middle set of gears. The clock will then work.

Leave the tower and go to the next map in the town. Board the train. Click on Rock Ridge as your destination. A train robbery will happen, launching another game. Read the directions and try to beat the game. Tip: If the bandits are just about to get to the front of the train, use the concentration carbonate to help you; just press space bar to use it. Once you beat the game, go down to the bank. It will be in ruins. Collect the final piece of the hideout map and leave town.

Go to the far left and enter the area where the star is. You will be at the hideout. Use the transparency tonic to sneak past most of the gang and then enter the house. A shootout mini-game (So many!) between you and the Mustachio gang will commence. To get the girl out of her hiding spot, shoot the bag on top of the safe that she's hiding behind. To get the guy with the orange beard out, shoot the gun above the fireplace. To get the guy with the sombrero out, shoot the root beer. Then, shoot the candle wick. Mustachio will then escape after you've beaten the game. Hop on your horse and chase after him.

When you get onto the map, the last mini-game (Finally!) will start. Here you have to chase after El Mustachio until he stops. Once he does, lasso him and drag him to Diamond Plains. There you will lock him up and receive the Island Medallion.

Galloping through the desert

The Common Room on Wild West Island is the Dusty Gulch Hotel. 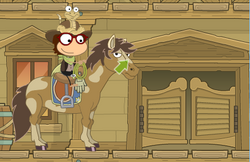 Horse Glitch: If you have the Electrify effect on, everyone riding on a horse will have the same color glow as you do.