Mocktropica Island
Virus Hunter Island was the 35th island on Poptropica. It was released on August 30, 2013.

When you drop down on Main Street, a van labeled PDC, which stands for Pizza Delivery Company (or does it?), will speed by an irritated old man. Go to the next area to the right. You will see a red-haired lady in a lab coat enter a building called Green Square Video Rentals.

Keep moving on until you come to a gym. Enter the gym and the lady will tell you that for the whole day, you can work out for free! Stretch the resistance band, and you'll break it. The lady will yell at you and demand that you leave and take the broken band with you. Walk back to Main Street. Jump onto the bus stop roof and onto the bird's nest. Your Poptropican will notice a hook that is just out of reach. Throw your resistance band to it and climb it to reach the building. Bert Shell is up there broadcasting some weird radio announcements about the government and their plans. Talk to him and he will tell you that if you can discover proof of government agents, he will get you into their top-secret facilities. He will then spot a van parked by a condo. Go to the left of Main Street and you'll see a guy in a shady van drive away. A bag of Shredded Documents will fall out of the back. Bring it back to Bert, and he'll tell you to arrange the documents. There are three documents you must piece together: a script, a map of a laboratory, and a pizza flyer. After piecing them together, Bert will give you a PDC ID Badge.

Go back to the Green Square Video Rental place and use your badge. You will then be allowed to enter the staff area. Take the elevator down to the laboratory and talk to Dr. Lange, the person with the red hair. You try to tell her you are an immunopathologist (quoted by someone else) but struggle to pronounce the word. She then tells you that she knows you are a phony, but you are in luck because an unknown man deemed Patient Zero is obliviously carrying the deadliest disease known to Poptropican. She gives you a Dossier describing what they know about Patient Zero, and a Camera and asks you to find him.

Now go to Knave Landing (to the left of Main Street) and search through their trash. Find the two letters that belong to Joe Stockman. Your Poptropican will then realize that Joe Stockman fits the bill. Now go to the right of Main Street and speak to the man at the falafel hut. He will take off for a delivery at Globochem. That's where Patient Zero works! Go to Globochem and run through the gates when they lift for the falafel guy to go through. Go to the top floor and reach the guy at the very end. Take a picture of him and go back to the PDC laboratory. Talk to Dr. Lange and she will show you a video about the CC13 virus and how dangerous it is. Then she takes you to a room with a giant shrink ray. She tells you that you will be shrunk to nanoscopic size and placed in a machine to travel through Joe Stockman's bloodstream to find and isolate the virus.

You'll be given a short tutorial on how to pilot your ship. Follow the instructions given to you by Dr. Lange and you will turn out fine. Remember the tools and what they do.

After you complete training, the PDC will sneak you into Joe Stockman's body. You'll end up in his stomach. First, go to the right, find the cut, and clog it up with coagulant. If a virus attacks you, shoot it to defeat it. After you kill a certain number of them, Joe will then get a splinter in his hand.

Travel through that flap at the right side. Go to Joe's hand and find the splinter in his finger. Some lymphocytes will attack your ship and steal your Shield, your Gravity Core, your Electrobolt, your Laser Scalpel, and your Coagulant. You'll need to find them and get them back!

Time to recover your shield! Go back into the stomach. Right then, Joe is drinking grape soda. You need your shields to protect you from the soda, so for now, don't go in the grape soda. Go up to the throat and wait for the epiglottis to open. Then go up into the mouth.

Now use the bubbles to lift yourself into the mouth. Avoid the canines (the sharp teeth) and get to the gold tooth. Take the shield by clicking on it and go back to the ship.

Into the Intestines We Go...

Now you need to go into Joe's intestines. Go through the grape soda down into the duodenum (the entrance to the intestines at the bottom of the stomach). Float down the small intestine, using your gun attachment to blast away blockage and kill viruses. Avoid the gastric juice that burns you. Take note of the penny at the bottom right of the intestine. We'll get back to that later.

Travel into the large intestine and get ready for the first boss fight. A giant boss virus will come out and extend its sharp tentacles down. To damage it, blast the yellow lumps on its tentacles. When it eradicates, it'll drop the Laser Scalpel. That's two parts down!

Now to the heart. Slice through the fat and you'll find a virus with sharp tentacles. Arm yourself with the Laser Scalpel and, while the tentacles are spread apart, dive in and slice about. It'll move on after you damage it a certain amount. Find it, attack it, and after the fourth time, it'll drop the coagulant!

Head off to the hand again and clog up the cuts in the fingers.

We're off to the arm. Unfortunately, at the moment, Joe is pumping iron at the gym. His muscles will continuously expand and contract. Watch out for the spikes on the muscles. Coagulate any cuts you can find along the way.

When you enter the next area, Joe will get a muscle cramp. The muscles contract behind you, meaning you are trapped in that area with a bunch of cuts you have to coagulate.

First, arm yourself with the gun attachment, and shoot the viruses inside the egg-like areas. Also blast apart the viruses that come too near. Be sure to kill that first, it makes your job much easier after. After eradicating all the viruses, coagulate the cuts and your Electrobolt will appear!

Use your Laser Scalpel to slice away all the calcium near the entrance.

Fun with Dangerous Levels of Electricity

Using the Electrobolt, go back to the intestines and find the penny. Electrify the nerves and the penny will fall.

Next, travel to the brain. Electrify the nerves to open the brain stem. There's a brain virus that will spawn tiny viruses and cannot be damaged by your normal weapons. It can, however, be fried by strong electrical currents.

Go to the bottom left of the brain and find the electrified nerve. Electrify the round end with the Electrobolt to move it. Connect the round end to the frilly end of another nerve and keep doing this until it creates a safe path of electricity to the nerve which the giant virus is attached to and it will electrocute him. After the fifth hit, it'll drop the Gravity Core, which you'll need later on.

Go into the mouth and blast away the tooth with the cavity. That would be the little sharp tooth sticking out from the gums. Once it's gone, escape to the heart.

Go to the heart. The passages are closed, but you can open them with the Electrobolt. Then, travel through the blood vessels and electrify that fissure with nerves sticking out. That'll fix Joe's heart arrhythmia.

Go into the lungs. They're just a bit further up. With the Gravity Core, you can finally travel there without being literally blown away. Travel to the left lung and you'll see a huge virus.

The virus will travel to the air sacs and extend one of its sharp claws on thick yellow pillars. Like most viruses, the only part of its body that can be damaged is the yellow part. Shoot the yellow parts continuously until the tentacle is destroyed. Keep doing this for all four tentacles, blasting them as soon as they are exposed, and then you'll have defeated the virus!

Joe then sneezes you out. Dr. Lange and the other PDC members claim that Joe's body has developed a special resistance against the CC13 Influenza Virus and call Joe a hero. Your mission, however, has been deemed a black op and no one is to know of your involvement. Dr. Lange then hands you the Island Medallion. Congratulations! You've completed Virus Hunter Island!

Poptropicans are feeling fine, but man's best friend isn't so lucky. Now, a sick dog needs your help. Head back into the fray to take down a new threat: the vicious heartworm!

Go to the Video Game place, then enter the Staff Only area. You will tell Dr. Lange that a dog needs help. Now go to the Falafel place. Talk to him and he will give you a Falafel. Use the Falafel when you are near the dog, then you will enter her.

Now once you passed that, you will go to the intestines. They will have some Nerves, so use your Electrobolt to electrify them. But there are also different colors, and some of them open one muscle and close one muscle, once you got pass them, you will get to the final tentacle, now head back towards the mouth. And the last dragon-thing will retract.

Now go to the lungs. There will be some tentacles, but they regenerate from some holes. When you shoot them, you can't coagulate the hole. There will be a hole that leads to the heart.

To defeat the Heartworm, you must destroy its plates using your gun. When you destroy a plate, two tentacles will appear. There are four plates, meaning that the total amount of tentacles is eight. Now, once you've destroyed it, go outside the dog using the blue blood vessel.

Dr. Lange will appear and give you the Ace Pilot Costume. Congratulations! You've completed the Bonus Quest! 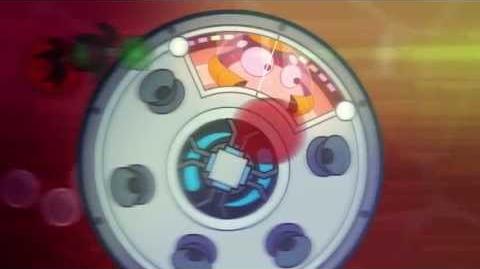 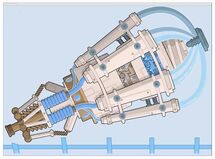 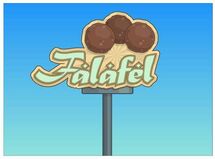 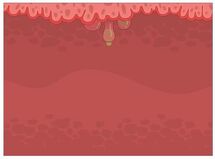 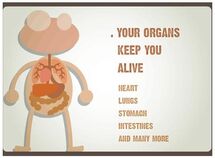 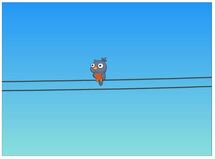 Just a lonely bird...Isn't it? 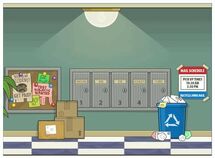 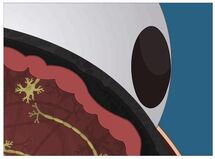 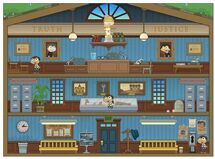 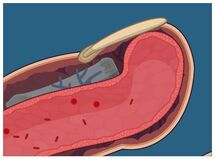 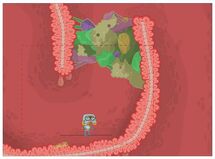 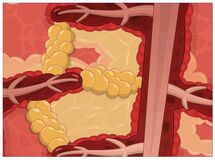 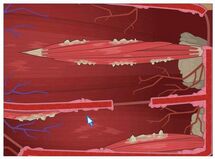 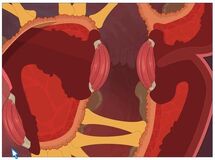 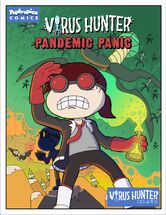 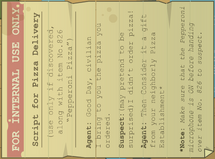 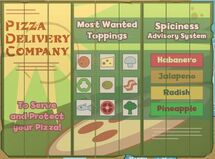 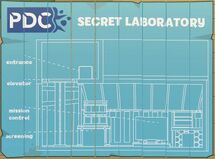 PDC Lab Blueprint, From PDC van
Add a photo to this gallery

Retrieved from "https://poptropica.fandom.com/wiki/Virus_Hunter_Island?oldid=122362"
Community content is available under CC-BY-SA unless otherwise noted.