For centuries, a truce has existed between the people of a remote mountain village, and the vampire who lives in the castle high above. Now, that truce is shattered, and Count Bram has captured a young villager. Can you rescue her from his evil clutches—and avoid being struck by the vampire's curse?

When you land on the island, you find yourself next to a sad woman in Main Street. Go up and click on her. She will say that her daughter, Katya, has gone missing with her boyfriend. Go all the way right, until you see an old woman by a sign. She'll tell you what Katya and her boyfriend were up to. Go right. You'll find Christopher haunched over near a pile of rocks. Go up and click on him, and he will explain that him and Katya went out to see Vampires, but Katya got taken by Count Bram. He nervously admits that he does not want to save her from the creepy vampires, and leaves, saying that there are plenty of other pretty girls in the village.

As your walking up the trees, you see a wolf (who is almost as scary as the Jersey Devil from Cryptids Island) and knocks you down on the tree branch. First hide in a tree and use the branch to knock out the wolf that comes running by. Jump up go to the left and a wolf will come and tackle you while braking a tree in the process. Oh, and you get a log. Go to the left up, and onto a bridge just pull the left knot on the bridge and the wolf will fall over. Climb the bridge like a ladder and see what the courtyard of the castle looks like.

Water Moats and The Spooky Castle

When you enter this next area go into a small white building. Inside there is a statue of a girl and there is a pink Teen Vampire Novel that's Katya's. There is also a crowbar on the left side of the statue that you will need to get. When you get back outside go to the next small white building and click on the pipe.You need to carry the pipe a bit. Stand on the red pump and water will come out of the gargoyle's mouth and it will go through the pipe which fills the spear pit with water so you can finally get over the spears. Now this is where it gets down to business this is THE REAL Count Bram castle... THERE'S NO TURNING BACK NOW! MWA HA HA HA!

Go to the left and you will see a boulder stuck in a big rock. Use the crowbar from your bag to wedge the boulder out of there push both boulders that you see down the hill to block up two of the geysers. Climb up the red steps and on top you will find a third boulder. Push it down and it will land on the other geyser causing the one last geyser to enough power to move it's water up high. Stand on top of the water and it will make you float up and enter through the window.

The first thing you will notice is "it's dark in here" the second thing is there's a fireplace. Put the log in there, then put the Teen Vampire Novel on it, glad Poptropica encourages reading! Step on the lever and burn baby burn. Push a ladder all the way to the left side of the room. Go back to the fireplace and grab a candle from the table and light it by clicking on the fireplace. jump up the ladder and light the chandelier by standing on top of it. Repeat this process by pushing the ladder beneath the chandeliers as you continue to go right and if you haven't burned the building down, you can see the entire room. (Helpful tip: get a candle and light it on the chandelier you last lit.) You find a glass eye on the floor that you couldn't see before, and climb up the left book case to see a tiger pirate head. Put the glass eye in and it's mouth will open (creepy) Now you have a key to the armory.

Grab the crossbow on the wall, it's important. You find a cannon with three cannonballs here's what to do.

1. Put one in, go to the library, grab a candle, come back in, light the wick and... BOOM! It goes out the window towards the village. I wonder where it went?

2. Put another cannonball in, use another candle to light the wick and it will roll outside use the fire poke to push in front of the fire and then onto the dumbwaiter.

3. Put the last cannonball in, light it and then it goes up and breaks the ceiling.

Climb up into this new area and use the crossbow to get up to the next platform, where you see a dying plant. Also grab the bucket.

You want to help this poor dying plant. And what are two things that help plants? Light and water! You take the bucket outside and either fill it up in the geyser, or the moat. (I know, right! All the way back there!) Take your pick. Go back to the plant and crack open the boarded up window with the crowbar. The plant will grow into a pathway outside. You will find a lab with some strange stuff inside, including a notebook. Take the notebook and move on.

The Resting place of Count Bram

If you look up you will see a girl in a cage. It's Katya! Yay! She wants Count Bram to get cured, and gives you instructions on how to make the Vampirism cure potion.

She also told you where to find a book, so keep in mind what she told you... First go to the lab and hit the dumbwaiter button it's your hot cannonball from before! It burns the flower and you get wilted wolfsbane! (you can't get the wolfsbane before the cannonball turns grey again) Then use the potion that's dripping to become a vampire tomato. You can now get the garlic on the high shelf. Go down to the library, hop on the bookshelf to the right, and grab the book root cause it shows you a picture of where it is and said that the root grows in high mountainous places, not very helpful as the castle is on a mountain, but it shows you a picture of the top of the castle wall and a hanging pot. Leave the library, and then leave the courtyard use the crossbow a bunch of times to make mini trampolines up the wall. Get the mandrake root hanging in a pot and head back to the lab to make a potion.

Click on the microscope to make your own vampirisim cure!

Head back to Bram's room and use a pole to get a key inside a cage to the right. Unlock Katya when all of a sudden you see... a bat!! But then he turns into Bram, which makes a lot more sense. Apparently, he thinks Katya's his wife, so you have to stop him from getting to Katya.

Yup, you're on the roof with Katya, Bram's pretty jealous, so you gotta get away while you still can. First follow Katya. When Bram starts chasing you put some fresh body oil on... Garlic! Eventually you end up on the top of the castle. Bram turns into a bat for some reason and you give him a "forced injection" with the crossbow. He turns into a human, then he joins his deceased wife up in heaven, and Christopher reunites with Katya. And finally, you get the Island Medallion. Congrats!!!

A picture of the Island's cinema. 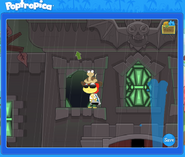 The window you fall into

The map for the island 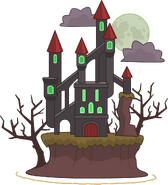 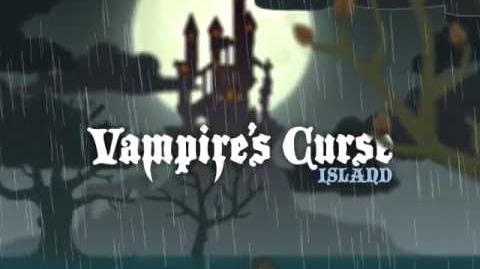