Once you enter the island, you'll land on a wobbly sign that shows a Poptropican falling off a cliff in Main Street. Jump down to the right, then walk to the right. At the end of Main Street, you'll see a sign that warns of construction up ahead. Continue right, and you'll enter the Construction Site. Continue right until you reach a man in a black suit, shades, and white construction hat who holds blueprints in his hand. He'll tell you that creatures from the forest have halted his new construction project. Then he'll ask you to enter the forest and stop the threat. Then a sign will pull up and tell you the island mission. Continue to the right, off the platform, and past a construction truck to a trash bin under a garbage chute. Climb up the trash chute. Continue to the right, where you can see a rope that leads to a lower platform. Slide down it, then head left until you fall down a step. Continue down the steps and then go left. Soon you'll reach the edge of the forest. Go ahead and enter.

Enter the forest and you will see the Lesovyk Rune stuck in a tree hole. When you pull it out, dryads will flood out of the hole and pick you up. While you are in the air, you must move to the right and scare the dryads away by shaking your cursor over them. You will land on a ledge. Keep doing this until you reach the last ledge and go right, ending the level.

Not the Christmas Kind

Go left, then climb on the branch, until you get to the top of the second one, then go left. In this level, jump from vine to vine while avoiding the elves that cut down the vines and the elves that jump onto the vines and tree to knock you off. When you reach a higher level, one of them will cut the vine right away and you will fall, but you will see the Kobold Rune and collect it. Then keep jumping from vine to vine and soon you'll be done.

After climbing the vines to the top of the forest, dryads will attack you. If you get stung 3 times, you will have to start over. They will move in patterns similar to Space Invaders. If they turn red, they are about to launch at you. If they don't launch at you for some time, it means that they are forming a circle you have to get in and out of. If they do so, they have no intention of launching at you. You have to duck under the first formation, jump over the second and get in and out of the third.

Rockin' Out with the Trolls

So you go to the next area which happens to be full of trolls, great. But this part isn't that hard! Just jump over the boulders they throw at you and jump over gaps in the hill. That can get annoying when you fall. At the top of the troll's hill jump on a ledge and watch his troll muscles fail him and, the boulder will fall on his head. Then collect the Jötunn Rune.

This part is kind of scary. You are trying to avoid an invisible coyote thing called the Nøkken. All you can see is its blood red footprints! When they are facing toward you, it means you should jump or get out of its way because when it sees you, it will pounce on you. If you get hit, you will have to start over! Beware, it can walk up trees and underwater you are not safe, for one thing there are these poisonous needle-like plants that sting at you, for another, if you see bubbles, run because that's the Nøkken too, nab the Näckrosor Rune, and run!

Zippin' Right by the Goblins

I know you're panicked after your ordeal with the Nøkken, but you have no time for being panicked, as angry goblins are chasing you! Jump over houses and duck under trees to stay ahead of them. Even though they throw javelins at you, they always miss, so don't worry about that. When you get to the zipline at the end, grab the Dökkálfar Rune and watch the goblins they fall off a cliff to their (possible) death.

Getting Some Fancy New Jewelry That Turns You Into Monsters

You find a giant tree with holes in it. Put your collection of runes into the holes in order. The order is: Lesovyk (Acorn), Kobold (Sprig), Jötunn (Tree), Näckrosor (Fruit Tree) and finally Dökkálfar (Tree Stump). And go inside the tree. You will find every single creature that has tried to stop you in this tree. But don't panic-they all seem pretty nice. The Elf Queen stands in the center of the room. Why don't you talk to her? She complains about deforestation, and you realize too late that you've led the Lumberjacks right here! They smash the orb and hightail it out of there. The Elf Queen's image starts to fade. She gives you a Forest Amulet, and you chase after those lumberjerks!

Use the fancy jewelry that the Elf Queen gave you to turn into three of your favorite monsters, goblin for speed, troll for strength and dryad for flight. Get to it, you don't have much time! Goblin up and dash over to the yellow crane. Then use your troll strength to topple the crane's arm holding the construction ball, dryad up and fly over to the top of the crane and land on the crane's arm. Pull the lever and the ball will drop on the bulldozer. Speed over to the bulldozer to throw the ball with your troll strength and throw it at the lumberjerk on the orange dump truck. Speed over to the orange dump truck and use your troll strength to smash the circuit and reveal the enemy. Burt Diamond will go away and apologize, more scared of you then he is of the creatures! Hurray! You beat the island and got the Island Medallion! 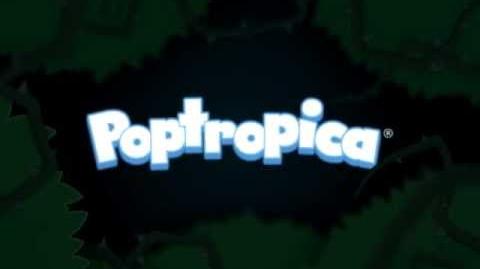 Poptropica Twisted Thicket-0
Add a photo to this gallery 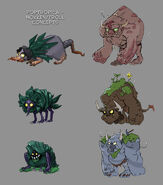 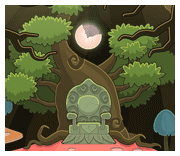 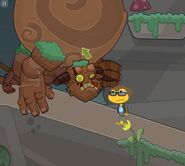 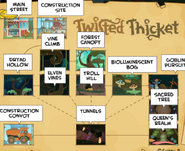 Retrieved from "https://poptropica.fandom.com/wiki/Twisted_Thicket_Island?oldid=122319"
Community content is available under CC-BY-SA unless otherwise noted.