Nabooti Island
Spy Island was the 6th island on Poptropica. The island was released on September 9, 2008 for everyone.

An organization called the Bald and Dangerous (or B.A.D. for short) is using a ray with an unknown chemical (most likely sulfuric acid) that vaporizes every Poptropican's hair. They have captured Headquarters' top three spies, adding frustration to Spy Island authorities.

Go up, and talk to Director D. He will give you a Decoder Kit.

Go outside and jump up to the top of the HQ. You will find a spy who will give you a message. When you decode it, it will say to visit Dr. Spyglass and when he shows you a symbol, do the one that is opposite. So, you go to the spyglass place on the right. Talk to the doctor inside, and ask for an eye exam. But when he gives you one, click on the symbol that is directly opposite as the spy told you. For example, if he points to a W, click on the M. He will tell you to meet him upstairs. Then, go outside and go up the ladder to the door. Talk to him, and he will give you a chameleon suit, which allows you to blend in with your surroundings.

Then, go left to the Docks. Find the spy in the trash can, click on him, and he will give you a message. The message will say "On the roof". Then, make your way up the building, avoiding the guards, and find the little door to the attic. Go to the bottom, avoiding the three vicious dogs and the guards. Get into the safe and free the spy. He will give you a clue and the Laser Pen, which allows you to cut through metal.

Go to Toupee Terrace. There you will find a large building with most windows and doors guarded by lasers. Use the windows guarded as platforms while dodging lasers with correct timing and work your way up. Once you get to the very top of the building, you will see a window protected by bars. Use the Laser Pen the first spy gave you to cut the metal and go inside the window. You will then be in the attic. Free the spy there. He will then give you a clue and a Grappling Bowtie.

The Spy in the Bushes

Talk to the spy on the right of Balding Avenue. He will give you File X. If you read the first column of letters

Above the spy in the bushes, you will see a tan and brown building. Grapple to the top of it until you see a metal platform leading to the rooftops. When on the rooftops, grapple left to the tall, whitish-gray building. You will find a B.A.D. guard waiting for you. If you grapple up, you will hit lasers that will stop you. So, to avoid the guard and lasers, grapple to the Satellite tower on top of another tan-ish building. You will encounter a spy on the tower, who tells you to grapple to the antenna on the blackish gray building. Climb in the vent.

You will find yourself in a greenhouse. Avoiding the carnivorous plants, go to the right and find the cherry bomb tree. Click on the fruit to start it. Push it to the side, where the spring plant will bounce it up. Go up, and push it to the right, onto the other spring plant. Then, go to the top, where the candy is, and push the fruit to the lock. Wait for the bomb to blow up the cage lock, then talk to the woman who got locked. She will give you the last clue, and Ultra Vision Goggles, which allow you to spot all lasers. Then go out of the greenhouse, and go down.

Go into the BAD bistro, and get the job as the chef (it is frustrating, but possible). Go to the angry guy at the table, and get his "drink" fingerprint (on the glass). Then, go into the kitchen, and go out through the pipe at the top. Jump from lamp to lamp to escape.

Go to Toupee Terrace, and go to the BAD Control Center, on the right. Put on the goggles, and get past the lasers. Go up to the door (this is frustrating as well) and use the fingerprint to get in. Go to the top, and click the computer. A cage will fall on you. Then Director D will free you. Enter the passcodes, one at a time (they are Laser, Hair, Removal), and then go in the teleporter. Director D will show himself to be the head of BAD, and he will make his mini bots attack you. There are four bots, and there are four glowing yellow globes. Use the bow tie to get to two of them. When the bots hit them, they disintegrate. Repeat this with the four bots, and then Director D will begin trying to zap you with his flying control room. Use the bowtie to get to the ceiling. The control room will start breaking upon contact. Do this three times and Director D will give up. Then, you will appear in Headquarters, where Director D is imprisoned and you are made the new boss. Then you will get the medallion! 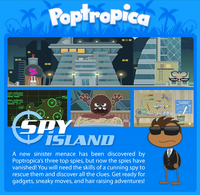 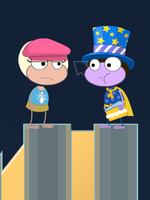 Retrieved from "https://poptropica.fandom.com/wiki/Spy_Island?oldid=122576"
Community content is available under CC-BY-SA unless otherwise noted.