Snoopy is Charlie Brown's smart dog in the PEANUTS franchise. He appears on Great Pumpkin Island multiple times, but his main goal is to defeat the Red Baron.

Snoopy is a white dog with black ears and a red collar. When in his Flying Ace costume, he wears a green helmet and a red scarf.

Snoopy often fantasizes as a Flying Ace and tries to defeat the Red Baron.

Snoopy is first seen when he helps you gather leaves into a pile. He later appears when you throw the Football and knock his helmet down from a tree, causing him to pursue the Red Baron. When you and Snoopy get shot down, you must crawl through trenches in a scene directly taken from the movie It's the Great Pumpkin, Charlie Brown! Later, at Violet's Halloween party, you play songs for Snoopy on a piano. Snoopy makes his final appearance in the pumpkin patch, where the Great Pumpkin turns out to be Snoopy with a pumpkin on top of his head. 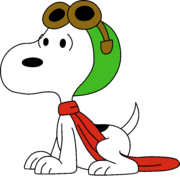 Add a photo to this gallery
Retrieved from "https://poptropica.fandom.com/wiki/Snoopy?oldid=119213"
Community content is available under CC-BY-SA unless otherwise noted.