Male
Sir Rebral is one of the super-powered escaped criminals from the County Prison in Super Power Island. He is also one of the villains of the island.

Sir Rebral has green goggles that look similar to Dr. Hare's, a scar on the right side of his face, and a beard that wraps around his mouth. He was in jail for playing mind games.

After the radioactive meteorite crashed into the Prison, he, along with the rest of the inmates, was mutated with powers and given mind-control and telekinesis. He escaped to City Park and somehow knocked the head off of the statue of Curtis. Sometime later, he climbed onto the statue to ensue the fight. Soon you arrive, and he uses telekinesis to form a shield of rubble around him. He also uses his powers to throw rocks at you. You must lead the boulders into him to make him angry. Then he'll make the ground start to shake. Rocks will rise from the ground and hit you, sending you flying. You have to go to the left of the bathroom, push the boulder next to the statue, and then, when the ground is about to erupt, move the mouse towards Sir Rebral. The ground will push you up, but the boulder will hit Sir Rebral, knocking him unconscious. Then the hero uses the Anti-Power Handcuffs to weaken Sir Rebral to the point where he can't use his powers. The hero escorts Sir Rebral back to Super Power County Prison and promptly locked up for good.

While in the act of stealing the Queen's crown jewels, Sir Rebral was caught and whisked away to Super Power County Prison. He is shown on his Criminal File to be arrested also for playing mind games. However, he is not seen or mentioned in the island itself.

While your Poptropican rides up the elevator in Erewhon Prison, Sir Rebral can be seen sitting in a cell with Mr. Silva. If you click on him, he'll say, "Every day the same slop."

In the Super Villain Island Bonus Quest, he and the other Super Power Island villains were reported to have captured a guard and held him hostage in a prison cell. It is unknown what happened to him.

He is one of the villains that must be defeated to retrieve Ned Noodlehead's comic books. You must catch 20 of the tomatoes he throws at you.

The Daily Paper's newspaper after the defeat of Sir Rebral.

Sir Rebral on the Poptropica Friends Question 'What would your Super Power Be?' option for Telekinesis. 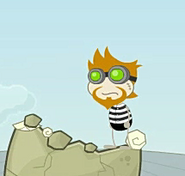 Sir Rebral being knocked out

Sir Rebral controlling the litter near him with telekinesis

In Poptropica Adventures
Add a photo to this gallery

Retrieved from "https://poptropica.fandom.com/wiki/Sir_Rebral?oldid=117399"
Community content is available under CC-BY-SA unless otherwise noted.