Sir Pelasus, also known as Sir Pelleas in Poptropica Adventures, is a knight from Astro-Knights Island.

Sir Pelasus is a dark-skinned man that wears red Fire Proof armor along with a helmet. His cape has fire designs near the end of it.

He once set out for a journey to help recover the missing Elyana along with Sir Cador and Sir Gawain. He went to Fire planet (X-83 Y-20) and landed somewhere unknown. He was defeated by the strong Dragotank in a cave, believing the princess was there. He then met the Chosen One and gave him his Ice Arrow to slay the Beast. But after the battle is won, the Princess is nowhere to be found. He offered to enter the Chosen One's quest and defeat the Tyrant.

After all hope was lost, the team decides to find a key in the asteroid belt. When they get there Pelasus was confused. After the war was over, Pelasus is humbled by the Chosen One's bravery.

He is seen in 2 profile quizzes in a roller-coaster with various loop-the-loops and another sweating in the sun seeing no snow. 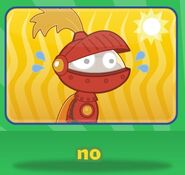 The no answer to the question "Have you seen snow falling?"
Add a photo to this gallery

Retrieved from "https://poptropica.fandom.com/wiki/Sir_Pelasus?oldid=117040"
Community content is available under CC-BY-SA unless otherwise noted.