When a player runs with this item equipped, a red path follows them as they go.
These Running Sneakers are a wearable item currently avaliable in the Poptropica Store. Despite what the caption says on the card, this item does not change the speed of your Poptropican.

This item has appeared in the Poptropica Creators' Blog twice in order to promote a mini-game called Feats of Speed, in which you must beat a character named Speedy Sam in a race in order to win the shoes. In the the first blog post, the shoes are shown as purple. However, nearly a week later the mini-game resurfaces and the shoes are red in the second blog post. 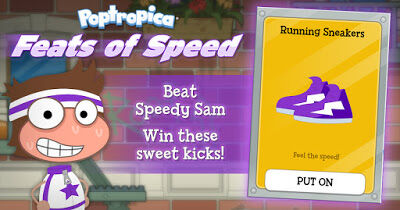 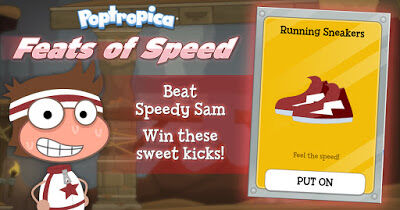 Retrieved from "https://poptropica.fandom.com/wiki/Running_Sneakers?oldid=119436"
Community content is available under CC-BY-SA unless otherwise noted.