Ringmaster Raven first appears to be a cordial and amiable character who can even be described as helpful. His pleasant qualities are, however, a disguise, and he soon reveals himself to be a scheming villain. With a sense of imbalance at the injustice done to him when he was a child, Ringmaster Raven is vengeful and harbors ill intent. Besides this, Raven, as a child, was seen to be a lonely boy.

While wearing a bird mask with its dark beak fitted over his pointed nose, Raven's eyes are the usual half-closed ones possessed by many Poptropicans white with black pupils. His glossy top hat is adorned with a red stripe at its base and semicircular eyes slanting inwards to form an intimidating glare. Beneath it is wavy black hair and facial hair around his cheeks and chin. Feathery wings sprout from both his shoulders and a grand cape falls behind him in red waves. He is suited in a black outfit, a brown shawl draped around his neck and a belt of vials strapped around his waist.

When unmasked, the ringmaster's eyes are black with white pupils.

At one point, he is seen wearing a dark purple cloak that covers his entire body, except for the eyes. He also wears a matching cape and belt.

Ringmaster Raven was an orphaned boy who was born deformed with avian-esque features, including a long pointed beak-like nose and bird like-black eyes. He was picked up by a travelling carnival and used as a side-show attraction until he was left behind when the caravan left town- it is never specified whether he was accidentally forgotten or intentionally abandoned. Some time later, Bird Boy was accused of burning down a shop, although it is very heavily suggested that he was most likely framed by the real arsonist. He was driven out of the town as a result and wasn't seen or heard from again for twenty years, though a newspaper article suggests that the residents may have been anticipating his return. As an adult, he became the ringmaster of his own carnival and traveled from place to place until he returned to the town he'd been banished from, where he proceeded to carry out his revenge against the townspeople. However, after trying to hypnotize the player, Raven winds up being hypnotized himself and is rendered powerless. After being subdued by the player, he becomes a side-show attraction in his own carnival, with Edgar having taken his place as the ringmaster. It is never revealed what eventually became of Raven, whether he remained in his hypnotic state permanently or if he happened to somehow snap out of his trance- and in the latter case, whether he heeded the player's advice and bettered himself or plotted vengeance once more.

He entered the town in the carnival and does not do much for the first half of the island. However, he hypnotizes the carnies into heading deep into the woods at night, and, disguised as a cloaked figure, transforms the carnies into monsters. He then hypnotizes Edgar, a carnie apprentice, and he tricks you into making him some more of his Hypno-Powder (sodium thiopental). He captures the townspeople and his plan was to use the powder to hypnotize the townspeople. Upon your return, he then reveals himself to be Bird Boy, and attempts to transform you into a monster as well. However, you avoid this and after a long chase (and saving Edgar with fried dough), you corner him in the mirror maze and hypnotize him into becoming a chicken. He then returns to his carnie family, only now as the Incredible Chicken Man.

Ringmaster Raven as a child

Ringmaster Raven as seen in the trailer. This was the first glimpse players got of the Monster Carnival antagonist (notice the cracks in his mask and the strap holding it to his face, two details that were either left out of or removed from his in-game appearance).

Ringmaster Raven with his mask on, note the differently colored eyes 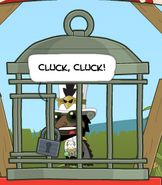 The Incredible Chicken Man
Add a photo to this gallery

Retrieved from "https://poptropica.fandom.com/wiki/Ringmaster_Raven?oldid=120318"
Community content is available under CC-BY-SA unless otherwise noted.