Mythology Island
Reality TV Island was the 11th island on Poptropica. It is based on the hit reality TV show, Survivor.[1] The island was released on February 24, 2010[2] for Members and March 24, 2010[3] for non-members.

To complete the island, you must compete against 7 different people - some of whom are characters from previous islands, others who are new and only seen on Reality TV - with 7 different challenges, in order to be a hero of the town (Wayside Town).

First after landing on the Island, go to Mike's Market. Go to the far right and you'll see a man reading a magazine. Talk to him. He will mention stocking up on snacks for the Reality TV Show before running off, dropping the magazine. Pick up the magazine and take out the application from inside it. Note the phone number of the Papa Pete's pizza and Bucky Lucas' room number. Leave the market. Go to The Wayside Motel to the left and enter room 2B, which is the motel office. Go to the desk and pick up on of the red pens on it. Now click on the phone and type in the phone number of Papa Pete's. Tell them to bring it to room 4b.

Go to TV World to the far right and enter. Click and change the channels of a TV until you get to the channel showing the Reality TV Island commercial (its the one with the random poptropicans). Get the address to send the application to and leave TV World. Go to the mailbox. Go to your items and attach the stamp to the application. You can also use the red pen to write whatever baloney you want on it too. Put the application into the mailbox. A time skip will then happen and you will come out to find that your application has been received and the helicopter has arrived. Board the Helicopter.

To complete the island, you must win the show by competed against 7 other competitors during 7 days with 7 different challenges. There's total of 14 challenges, which randomly ordered in the show. After you have placed first in the tie-breaker contest, you will return home to receive the Medallion. If you get voted off or lose the tie-breaker, you must start over by entering the helicopter and returning for a new season. And after you beat the competition, you get the Island Medallion! Congrats!

There's total of 14 different challenges that you may compete in. Each round's challenge is selected randomly. You must win the challenges to avoid being voted off. Below is the list of challenges and their quick summaries:

Aim correctly and fire the coconut in order to collect points. Try to reach the 20 points shell.

Click on your boulder repeatedly and as fast as possible in order to push it across the finish line.

Try to avoid the falling coconuts by hopping onto different poles in order to reach the top first.

Race up the mountain as you try to dodge falling boulders and reach the finish line before the other competitors do. (There is a glitch that your Poptropican becomes invisible and invincible)

Throw your boulder as far as you can to win this challenge.

Glide through the sky as you avoid lava from the volcanoes and flying birds. Stay in the air the longest to win.

Aim the center of the board. The person who's closest to the center at the end is the winner. There's 3 rounds in this challenge.

Avoid the moving totems that wobble and fall. The last person standing is the winner.

Hit the other competitors' plates with a slingshot. After 3 rounds, the most intact plate is the winner.

A completely random challenge, you can test your luck by standing on the geyser you picked. One geyser explodes each round. The last person standing is the winner.

Try to collect 20 coconuts before any opponent does, but avoid the bombs!

Main article: On The Line

Collect 5 fish before the other competitors do.

Jump over platforms, being careful to avoid a wild boar, in order to fill your water tank from the waterfall completely first.

Keep your pole balanced longer than any of the other competitors to win.

The people who you can compete against are:

The Common Room in Reality TV Islands is Billiards. 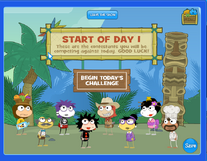 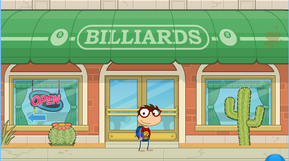 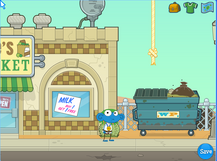 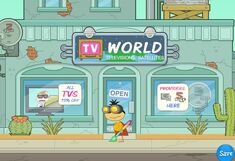 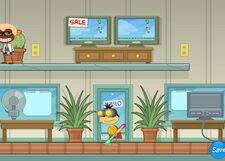 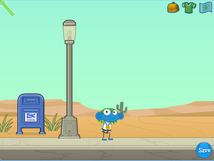 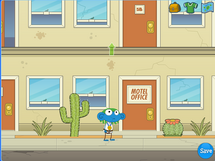 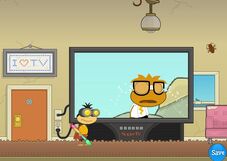 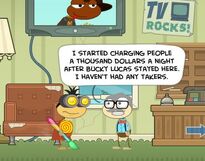 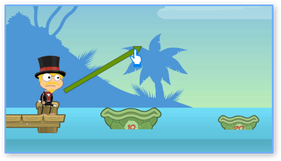 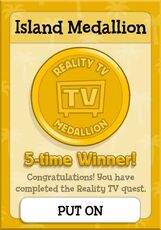 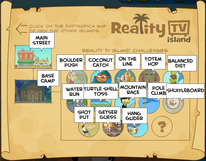 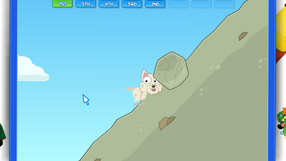 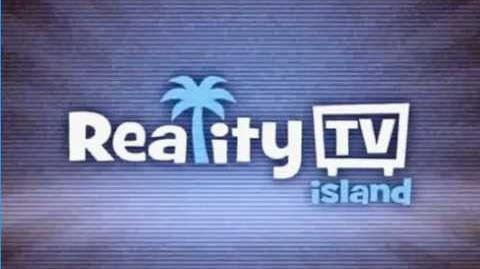 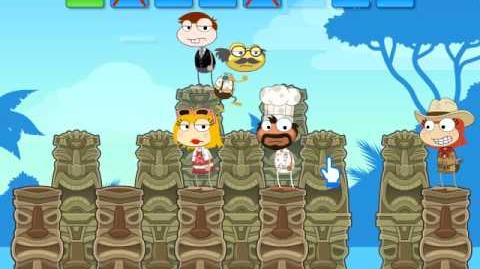