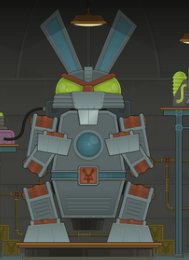 The Rabbot was a giant Robot created by Dr. Hare. It was operated at Dr. Hare's secret lair, but it was destroyed by a poptropican who controlled it.

The Rabbot was a giant robot rabbit that Dr. Hare built. After you launch the Rabbot into space, you must use the joystick to crash the Rabbot into four asteroids to destroy it, stranding Dr. Hare in space (Although he survives the fall and gets saved, marking the later appearance of Reality TV Island).

In the mini-island Dr. Hare's Secret Lab, there is a Poptropican-sized Rabbot suit that Dr. Hare was planning on using for his evil deeds. You must find all three key cards and unlock the suit. After this you can customize off the suit as a reward. 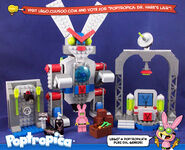 The Rabbot on the computer monitor.
Add a photo to this gallery

Retrieved from "https://poptropica.fandom.com/wiki/Rabbot?oldid=115568"
Community content is available under CC-BY-SA unless otherwise noted.