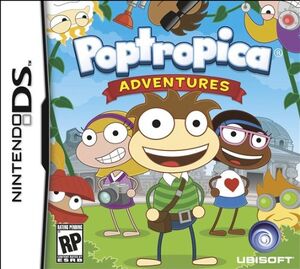 Poptropica Adventures is the first separate video game from the online version made by Ubisoft for the Nintendo DS. In the Nintendo series, it was preceded by Forgotten Islands for the Nintendo 3DS. There are also 2 promo codes that are completely random. The promo codes can be used to obtain the Medusa Surfer costume and the Lightning Knight costume.

When you turn on Poptropica Adventures, the game will prompt you to touch the screen. Once you start, there will be three buttons: "NEW GAME," "CONTINUE," and "CREDITS." When you start the game, a Poptropican appears, and you will be able to customize it. When you are satisfied with your character, you can play one of four islands: Astro-Knights Island, Mythology Island, Super Power Island, and Museum Island.

The first island you land on is Museum Island. When you reach Museum Island, there will be a curator who is the owner of the Museum. He has a grey beard, a light skin tone, and has some green and red traditional clothes. He says that he is happy to see you, but he has some terrible news. Follow him into the museum and he will explain that the museum's contents have been stolen. The first thing you have to do is explore the run-down, empty exhibit halls. Next, the curator will tell you to follow him to the closet, where he teaches you how to use the costumizer. The curator's final job is for you to go to the other three islands and gather interesting things from them.

Talk to a man in front of the Crop Circle Inn, and he will tell you about a "strange, glowing green tube in front of the castle." At the castle, talk to a citizen, and he'll mention some wires that he found. Inside the castle, talk to the Queen of Arturus, and she'll mention that the king is acting strange. If you go to the king, he'll repeat the same robot-like sentence over and over. Report back to the queen, and she'll tell you to visit Sir Cador. He tells you that a stranger visited the king, and the king has been acting weird since then. The stranger also got permission to ride the royal rocket, commanded by Sir Pelasus. The stranger went to the Pewter Moon, and you have permission to ride an old rocket to fly there, but you need three items: a fuel rod, an electrical panel, and a wrench. The wrench is on top of Ye Olde Rumour Mille. The man in front of Crop Circle Inn will give you his fuel rod if you beat him in a race. The electrical panel is found on top of some junk in the castle. Return to Sir Pelasus, and he'll give you the job of fixing the electricity for the rocket. When you have finished, he sends you out to find a space map. The space map is given to you by an astronomer near the castle. You can travel through space by playing a maze game. When you reach Pewter Moon, you can teleport to the Fire Planet and play a jumping game. On top of the volcano, you'll meet a squire who was kidnapped by Binary Bard. You'll have to go back to the king's room and get a scepter from behind his throne to get rid of his power. Fly back, get the scepter, and then go back to the Pewter Moon. The alien operating the teleporters will steal the scepter and refuse to give it back unless you get them wires for the teleporter. Fly back to the Kingdom of Arturus and talk to the citizen who had the wires. He'll give them to you. Go back to the moon again, get your scepter back, and hook up the wires in another puzzle game. Go to the Jungle Planet, talk to Binary Bard, and he'll challenge you to a race with the Mother Phoenix. When you win, go to the top-left of the map, and talk to the king. He will let you use his scepter to go to The Crystal Gate and defeat Binary Bard. After another jumping minigame, the king will tell you to return to Arturus and inform the queen that he is safe. Fly back and talk to the queen. The citizens of Arturus are happy that everything is back to normal, and the player can go to another island.

The first person you'll meet will comment that they wish they could fly, and their helicopter game is the closest they'll get. Play their game for a costume and a statue for the museum. Run past Masks & Capes, and you'll meet Ned Noodlehead, who explains that super villains stole his three favorite comic books, and you need to get them back. Inside the Comic Shop, there will be an investigator who tells you to report to them if you find the thief. Leave the store, and you'll see a policeman who says that Ratman is in the sewers. Go down and play a puzzle game to stop the sewage stream. Navigate to Ratman, who has retired and is no longer a villain. He says that someone with pink hair came in and scared all his rats, and he wants you to find them. There are six rats, all spread around the same room, and they aren't very hard to find. When you've grabbed them all, Ratman will thank you and give you a comic book that he thinks is stolen property. Leave the sewers and climb up the "The Daily Paper" building. You'll meet a villain who will give you a comic book if you beat him in a game of catch. However, he claims that he didn't steal it. Go back down and climb up the next building. There's an open window. Enter it and you'll see a retired superhero who says that, if you solve a crime, he'll give you an official Super Hero ID card. Climb higher up the building and play a jumping game. At the top, you'll meet a villain who threatens to crush you. Play a game where you dodge 99 of his thrown statues, then he will give you a comic book that was given to him by a female villain. Now that you have all three comic books, return them to Ned Noodlehead. He is upset that they are in bad condition. Enter the Comic Shop again and talk to the investigator. The thief has been discovered as being a girl with pink hair who can fly, and she has a picture of her. The problem is that it's been torn into four pieces across Main Street! Find all four pieces and return to the investigator. She'll conclude that the thief is Betty Jetty! Betty Jetty is down in the subway, although you'll need a Super Hero ID card to enter. Go back to the retired superhero and get your ID card by using a letter of gratitude that the inspector gave you. The cop protecting the subway will only let you enter if you get him a Hot Dog. However, the vendor is out of buns, and the cop refuses to eat a hot dog without a bun. Buy a pretzel and give it to him to use as a bun, and he'll be fine with that. Enter the subway and confront Betty Jetty. She'll explain her reasoning for committing crimes if you can catch her! After a race, Ned Noodlehead will run down and reveal that Betty Jetty is... his sister! He tore up the picture because he didn't want anyone to know. As it turns out, Betty stole his comics because she was mad that he never shared. Ned apologizes and says that Betty can work with him in his comic store. Now that the Super Power Island conflict has been resolved, you can bring some artifacts and objects back to the museum.

Climb down from your blimp and go right. You'll meet Hermes, a messenger for the gods. He lost his special winged hat, so he can't deliver his messages. You'll agree to help him out. The first message is for Poseidon. You can go to his temple, but a waterfall is blocking it. Climb the mountain and connect the pipes of the statue to stop the waterfall. Now that you can enter, you'll be instructed to "play the sound of the seas" to open a locked door. Before you leave, pick up the pan pipes to the right. Go left to the tree, and climb it to meet a person who will trade you a conch shell for your pan pipes. Go back to Poseidon's temple, and play the conch shell. The door will open and you can now meet Poseidon in person. Give him his message. He will wonder why Hermes isn't there, and after you explain that he lost his hat, Poseidon explains that Hermes needs faith and not a hat. Before leaving, collect a fish. Report back to Hermes with Poseidon's words. He'll give you a package for Hades. Before visiting Hades's temple, go left and talk to the man with a cart of cabbage. He expresses his desire to have fish for lunch, so give him your fish and he'll give you a cabbage in return. Go back to Hades's temple and get Charon to ford you across the river by playing a maze game. At Hades's temple, he'll thank you for the package and state that Cerberus is ill. You'll agree to help Hades cure Cerberus by playing a catching game. He will give you a lyre and thank you for helping Cerberus get better. Hades also states that he misses Hermes and wants him to come back. Go back to Hermes, and he'll give you the last message, which is for Artemis. Artemis is found in the forest area, and refuses to read Hermes's letter until you find her six arrows around the island. One is found at the top of the tree, one is found at the tree's trunk, one is found on Mount Olympus's gate, one is found on the rocks leading to Poseidon's waterfall, one is found at the Poseidon statue, and the final one is found above Hades's temple. When you have all the arrows, return them to Artemis. The message states that there is a lost deer with a winged hat. Go right, and you'll find the deer. Use your cabbage to lure it in, and play the lyre to put it to sleep. Get the hat and give it to Hermes. Hermes compliments your fast work, and says that "you might even be faster than Zeus!" Zeus gets mad at this and challenges you to a race. When you win, Zeus congratulates you. Now that the conflict on Mythology Island is resolved, you can go back to Museum Island.

Place all your artifacts in the respective places. The museum owner will thank you for helping revitalize his museum. At this point, you can revisit previous islands to gain more artifacts. If you have all of them, you gain access to the museum game room, in which you can replay the various games and get high scores. 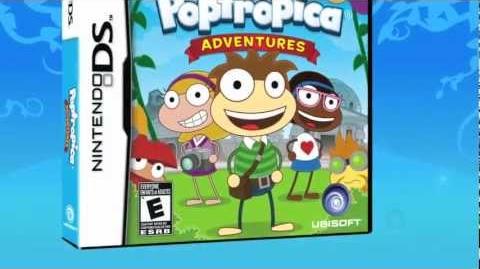 Retrieved from "https://poptropica.fandom.com/wiki/Poptropica_Adventures?oldid=118071"
Community content is available under CC-BY-SA unless otherwise noted.