Sandbox
Poptropica: Realms, formerly known as Poptropica: Land, and Poptropica Labs, is a feature on Poptropica. It is essentially a sandbox that enables you to create structures and change the landscape to your will.

Explore is the icon with the compass at the bottom-left part of the screen. It gives you the option to explore the surrounding area just like in a regular island.

The Mine function takes the form of the hammer icon at the bottom-left corner of the screen. It allows you to use the Svadilfari to destroy objects. Destroying natural objects also allows you to obtain Poptanium, which you need in order to create objects. You can toggle between mining background and foreground objects with the background and foreground options in the toolbar.

The Create function is the paintbrush icon at the bottom-left corner of the screen. Clicking on it, and then clicking on the plus icon that appears allows you to search through the Create menu to use different building materials. There are three segments in the Create menu, natural, construction and props. You can unlock more objects by leveling up. You can also erase previously used materials and toggle between brush sizes and background and foreground. Creating things cost you Poptanium but also help you to level up.

When you first create a realm, there are multiple Biomes to choose from, which you can alter at will. To celebrate the release of Poptropica: Realms, the Creators added new Biome Hats, which can be purchased for free in the Poptropica Store.

The Lunar Biome is a barren moon-like environment with lower gravity than other Biomes. The Lunar Biome Hat appears as a blue futuristic hat with an antenna.

There are many creatures that inhabit the world. Some are friendly while others are hostile. Hostile animals have red eyes and will attack you, causing you to lose health. Friendly animals will not affect you. It is possible to kill friendly or hostile creatures by using the Mine function or by adding dangerous materials. 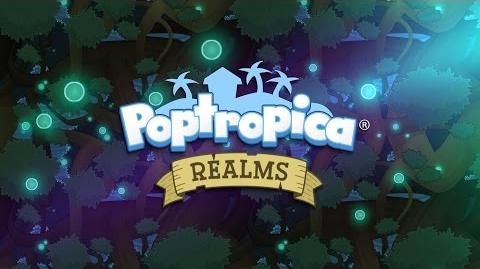 Retrieved from "https://poptropica.fandom.com/wiki/Poptropica:_Realms?oldid=112440"
Community content is available under CC-BY-SA unless otherwise noted.