Back Lot Island
Night Watch Island was the 33rd island on Poptropica. In it, you must join the night watch at Twin Palms Mall and find out what happens after hours in the mall.

After you arrive on Main Street in Night Watch Island, go all the way right to the Parking Lot. First talk to the crying guy, then the Sluggers owner. Now go to the left, find the door that says "Security Office" and click on the red button. The manager will appear and ask if you want the job and your training will start. (After you accept of course)

First you have to spot the 5 differences between two photos and then the manager will give you a segway. Hop on it and go to the right. You'll see two robots loitering in the mall. Click on them and you will tell them not to loiter. Progress to the right until you find the escalator. You will see a little boy playing on it. Click on him to warn him against it. Go back to the left and, suddenly, the old lady robot will yell for help and a thief robot will appear and steal the old lady's robot handbag. Go after him on your segway and you will eventually trip him. The manager then gives you the Security Guard Badge.

Go into the Security Office and there will be letters flashing on the screen saying "ALERT: Disturbance at 'MacGuffins." Go to MacGuffin's and click on the chair. It's a massage chair, and it will shake like crazy, and something will drop out. Now get off the chair and grab it. You will get a Smart Phone. The security guard guy will call and show you how to use the phone.

Exit MacGuffins and wait for another phone call. Use the security camera on your phone and find the disturbance at the Slugger's. Then, call the Slugger's owner. He will tell you to go to Slugger's and check on his baseball card. Go there and click on the statue to push it. Then put the code "6723" and you will receive the Baseball Card. Slugger's owner will call you again and say to put the card in the same place. Do it. Once again click on the statue to put it back into place.

Go to the mall atrium and wait for another call. It will say "ALERT: Disturbance in Giuseppe's Toy Store." Use the security camera to look at it. Scroll the camera view to the light on the ceiling. The security guard will tell you to go check it out. When you are in the store, you will pick up the Red Toy Bird and the Robot Toy that was the setting of the lights.

Go back to the mall atrium and wait for another call that will say "ALERT: Disturbance at Sizzle Tanning Salon." Look at the closed tanning bed, and the security guard will call and say he thinks he know what is going on.

Head to the Sizzle Tanning Salon and open the tanning bed with the smoke coming from it, ACK! It's a creepy tanned lady! Looks like she spent a little too much time in that tanning bed. You tell her the mall is closed, but she shuts the tanning bed. Cranky poptropicans these days...

Now leave and walk around until you get your next call which will say "ALERT: Disturbance at Good Deals Electronics." Look around the camera and everything seems fine, but then the signal gets lost. Gus tells you there's someone in the mall. Now go to Good Deals Electronics. On the TVs you'll see a thief walking by the doors. Uh Oh! We've got company!

Now leave and go to the mall atrium, and you'll get another call. "ALERT: Disturbance in Crawl-Mart." Look around on the security camera. You'll discover the coral snake is missing. Gus tells you to call the pet shop owner. Call him, and he'll tell you Little Eddie, the coral snake, could just be hiding behind a rock. So go to Crawl-Mart. When you get there, it will be pitch black, and you'll hear to people threatening to put you in a cage, but when the lights go on, you discover that they're not people. They're just parrots copying what their owner said to them. Now look in the cage, and you'll get a call from the pet shop owner. You tell him Little Eddie is gone. He tells you to get one of Little Eddie's favorite snacks so he'll come back to you.

Now you see there's a disturbance in Carnival Costumes. When you look at the camera, you lose the signal again. Go to Carnival Costumes. Click the criminal mannequin on the far left. It will turn out to be the actual thief, and will jump up and run away, knocking you unconscious. Gus will tell you that the thief is probably going to get the Quick-Charger from MacGufffins. So go to MacGuffins.

When you get there, hide in the pile of Quick-Chargers, and when the lights go off, the thief will sneak up, and you'll pounce on him causing him to run away. When you chase after him, he gets away too fast, but drops his Back Room Keys and you grab them.

Go to Good Deals Electronics. Put down your Toy Robot and it will keep the lights on so you can see everything. Sometimes, even plain toys are helpful. Now go to the back room door and use your Back Room Keys to open it since now you can see the lock. You'll go into the back room and click the New Store Application to examine it. It is for Preston Wilhelm, the PrintFax's owner's store. Gus will tell you he started hearing the noises in the wall after Preston signed the application. He tells you to look for clues in PrintFax.

Go to PrintFax, but before you can enter, you'll get hit by a go-cart driven by the thief! He'll drive off into the mall atrium. Gus tells you there's a scooter in the manager's office. Go to MacGuffins, and pick up the Quick-Charger. Then go back to the atrium and climb the escalator, getting hit by the go-cart once. Then go into the manager's office. Click on the little computer next to the glass case and you'll play a minigame where you use the notes that Gus sent you on your phone (he can never remember the password, and it changes every time you play) and guess the word over and over again until you get the password. Once you do, the glass case will open up. Now use your Quick-Charger to charge up the segway. Now ride it out of the manager's office.

Once you get out, go either left of right to the hallways (right, of course, is closer). Then just go back. The thief will ride up the right escalator, so go to the bottom of the left one. Sure enough, the thief will come barreling down in the go-cart, and you'll catch up to him, causing him to hit the fountain and go flying into the air. When he lands though, he gets crushed, and you discover he's the training robot! It was just a decoy! Now in the PrintFax security cam, you'll see the thief copying something. Now run to PrintFax and click the printer. Then click "Print Last Scan." It will print out the baseball card from the safe! Now run to Sluggers and move the statue. The whole safe is gone!

Gus calls, and you both agree it probably fell down into the new store. Gus tells you there's a blowtorch behind the picture in the manager's office. So go to the manager's office and click the "Employee of the Month" picture. It will open up, and inside there will be a Blowtorch for you to grab. Now run to the new store and equip your Blowtorch. Then burn the lock off with it and go inside. The thief will be talking to himself about how good the forgery is, but you will get his attention and try to capture him. Then he will jump onto a ladder and run into the vent system. Follow him.

Once you get in the vent system, the thief will close to gates on you and climb another ladder. Burn the gates with your Blowtorch and climb after him. Once you get to the top, jump to your right and burn out the gate next to the big fan. Drop down and burn the next gate. Then climb the first ladder and burn the brown gate next to you. Use the fan to get to the top and burn the A/C to stop the fans and drop down. Then run left and climb the next ladder. Once you get to the top the thief will run away and shut all the gates above you. Burn the one above you and run to the left. Then burn out another gate, and drop down onto the fan, and you'll blow up into the air. Burn the next brown gate out in midair, and run left. Then drop down and the thief will get carried up by a fan but can still shut the brown gate to your left first. Run to your right and burn out the A/C, but the thief will put stack tanks up above the ladder to block you from getting up to him. Burn the brown gate next to you, and then run to the right and burn the next brown gate. Then climb ladder and burn the next brown gate, then drop down off of the tanks. Now the thief is trapped, but unfortunately, he gets all "Mission Impossible Ghost Protocol"ey on you, and jumps from a great height onto the area where all the big fans are. Unfortunately, you shut them off when you burned out the A/C.

Now drop down to the bottom where you'll see the thief unconscious. Take the baseball card, and he'll wake up and kick you, causing you to both go flying out of a vent into the mall atrium. Luckily, you land on the fountain. But you're knocked out, and the thief has the card. He's about to gracefully jump down and sell the baseball card for a ton of money, but like usual, when all hope is lost, Little Eddie, on his trusty steed (a hijacked segway) saves the day, and knocks the thief off the fountain in a not-so-graceful way. Told ya Eddie would return!

The cops, who were called here by Gus, unmask the thief revealing Preston Wilhelm, the "charming" PrintFax owner. They take him to the Big House, so I don't think we're gonna see him for a while. And best of all, Gus rewards you with the medallion! Looks like all turned out well, except for the fact that it's gonna stay about 80 degrees in the mall for a long time, and the fact that a training robot just separated a bunch of valuable baseball cards, but that's more of a bonus quest. Anyway, all's well that ends well, (except the fact that the lady is STILL in the tanning bed) and you learned a very important lesson about teamwork. Over a smartphone, I guess it's more of a lesson about the value of smartphones. Oh well, looks like we're outta time, so see ya on the Back Lot Island guys!

A training robot has stolen a rare 1960's baseball cards from Slugger's. A total of 9 cards are scattered all over the mall. Here are the locations: 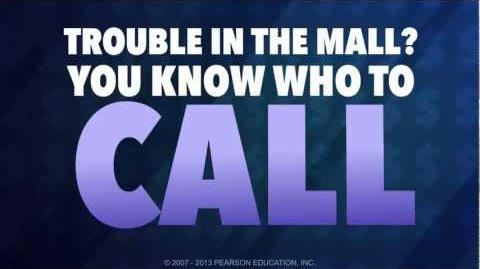