Ned Noodlehead is a generous comic book salesman located on Super Power Island. He is also the online avatar of Jeff Kinney his username being Comickid. On the Creator's Blog, his username is Comic Kid. Jeff's Poptropican name is Sleepy Flipper. According to Poptropica Adventures, he is Betty Jetty's brother.

Ned is an average sized Poptropican. He wears large black glasses with tape on them. He has yellow-orange hair in a mullet. He wears a creamish shirt with a pocket, buttons, and a collar. In the pocket there is a blue pen. He wears forest green overalls and a small red bow tie. He has large buck teeth and 8 freckles. As "Hot Dog Boy" he wears a light purple cape. If you dial 1337 (Leet) on your Nabooti Island cell phone, you get most of his outfit and his nerd-like appearance.

Ned is an average hero-loving civilian who works at and own the Comic Book Shop on Super Power Island. His alter ego, "Hot Dog Boy," is an average super sausage superhero/sidekick. He will give you a manual on how to become a super hero. After you have defeated the first five villains and you knock Betty Jetty out of the sky, Ned dashes into her, knocking her out. Despite the fact that you defeated the first 5 out of 6 bad guys, Ned steals your glory and is awarded the island's medallion and celebrated as a hero. However, he is willing to trade the medallion for a hot dog.

Ned also appears on Reality TV Island as a fellow competitor occasionally. Before the challenges, he says, "Just give me a hotdog and I can take any challenge," "Did you know I'm really a super hero in disguise?" or, "Did you know I've memorized over 2,000 comic books?" He never appears as "hot dog guy" or even when he appears with a cape on him.

When Ned's comic book shop was robbed, he asked a Poptropican to help figure out who did it. But when he discovered it was his sister, Betty Jetty, he destroyed all of the evidence that it was her. Unfortunately for Ned, the Poptropican put the evidence back together and caught Betty Jetty in the subway. Ned ran in and told the truth of what happened, and Betty said the only reason she stole form the comic book shop was so she could share them with everyone, which Ned never did. Therefore, he hired her to work in the shop and help share the comic books.

A Poptropican with Ned Noodlehead in a multi-player room.

An unknown Poptropican that looks similar to Ned Noodlehead. 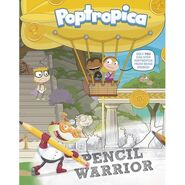 Ned Noodlehead on the left on the cover of Pencil Warriors.

Ned Noodlehead on right back 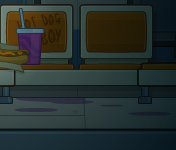 In Poptropica Adventures
Add a photo to this gallery
aMjJNeFJWUTI5dGFXTnJhV1E9

Retrieved from "https://poptropica.fandom.com/wiki/Ned_Noodlehead?oldid=122805"
Community content is available under CC-BY-SA unless otherwise noted.