This Walkthrough is based on the original (classic) version (Flash or mobile app version). If you play the remastered version (Hexa version), use this walkthrough with some exceptions (check below).

Arrive on the Main Street of Mythology Island.

Enter the Museum of Olympus. Watch the cutscene of the battle of Zeus, Hades and Poseidon against the Titans on the wall mural before heading to the right. Take the starfish from Poseidon's statue. Leave the museum and go to the far right.

Enter the Grove of Temples and enter the Temple of Apollo. Get a reed pipe from a box on the right, then locate the statue with the reed pipe. Talk to the statue and ask her to teach you how to play your pipe. Watch what she plays carefully, then follow. When you have passed her test, she will give you a tune that can be used to put Cerberus to sleep.

The Apple of Immortality

Do this before the other step or you will not be able to get a reed pipe. Return to Main Street, and go left to the Tree of Immortality. Climb up the stairs to the tree. When you get to the branches, go to the right, jump on the snake, go to the left (don't climb the honey), bounce up using the mushrooms, climb up the sleeping snake to the highest branch you can, go to the right, and meet the satyr. He will tell you to get 10 jars of honey. Just jump around the tree until you find them under a time limit of one minute. When you find all ten, go back to the satyr. Talk to him, and he will show you a secret path. Go up it, and stomp on the branch to get the apple down. Pick the apple up, and the satyr disappears. Zeus appears and tells you to get five sacred items for him. They are listed on a scroll that appears. Exit the tree, and Athena will show up. Ask her if she can help you, and she will send golden olives onto the trees. If you need help, click on them if you see them.

Now, go to the left. Go over the bridge, and click on the withered flower next to the Sphinx. She tells you to bring the water back. Go up to the aqueducts, and turn all the levers and push down all the bridges. Then, when the water flows down, the flower will be healthy and rainbow colored. Click on it, and you pick it! Then, go to the ledge on the left. Jump onto the Sphinx, then jump onto that ledge. Get the pomegranates from the tree, then go back to the bull ring door.

Go inside, and meet the Minotaur. He will tell you to find your way through his labyrinth. Go inside.. Go mostly toward the right. It might take a while. Find the white satyr ghost. Then go above him, and click on the column with the bones. Click on a bone, and it disappears. Make the bones spell out TEN. Once you do, the door will open. Go right. Find your way to the giant scorpion. Jump over it and continue right. Go out the door. You're not done yet! Click on the picture, and begin the red eyed snake challenge. You must click on the red eyed snake three times to open the stone wall. Once you do, you can get the golden ring from the Minotaur. Exit the Minotaur lair and go to the grove of temples.

Now, go to the Temple of Hades. Click on the graffiti writing on the walls, then clean it up. The guy there will give you a drachma. Then, go into the temple. Use the pomegranates putting them on the altar, and the door will open. Go in, and fall down the huge pit. Once you get to the bottom, tell Charon that you are ready to go. You must now avoid getting knocked into the river. First, a stalactite falls. Avoid it. Then, a flaming skull comes. Duck or jump over it. Then, a river alligator comes up from the river. Jump over its jaws. This process (rock, skull, alligator) repeats a few times, then it's over. A good way to do this is stand right on Charon. Don't do anything when the rock falls, it won't hit you, then jump over the skull and alligator. If you somehow come out from behind Charon, get back behind him before the next rock comes. Then, you will see Cerberus, the monstrous three headed dog. Use the song you learned to put him to sleep, then get his whisker.

Go in the Temple of Poseidon. Go to the door. It won't open, so use the starfish you have and put it on the altar next to the door. It opens the door. Go in, and you will be on Poseidon's Beach. Go past the beach girls and to Aphrodite (Goddess of Love), and ask for help. She will give you a test where you must name some gods. They are: Ares, Hermes, Aphrodite, Artemis, Hestia, and Apollo. (Apollo was added in once the island updated.) Once you name them, she will give you a mirror that can transport you to the realms of the major gods (Lightning-Zeus, trident-Poseidon, heart-Aphrodite, skull-Hades). It is quite helpful. Then go left and dive in the sea. Go mostly to the right. Pass the barrier that you can't break through (You'll need help from Hercules to get it down later), and go left. Get the pearl from the giant clam (it knocks you over if you bump into it when it is closing), and go into the cave. You will be in the Hydra's lair. When it's head makes a face, it's about to bite you. Jump, and try to land on the head. Hopefully it will go THUMP!, and the head will be knocked out. When all the heads are knocked out, you can get it's scale. Use the mirror to escape back to Aphrodite.

Now, go back to the Tree of Immortality. Athena will meet you there, and you will put together the secret message contained in the sacred items, it says "Whoever wields the five sacred items will rule all of Poptropica!" Then Zeus would appear and take the items! Then Athena tells you to go to Hercules. Now, you must go to Hercules, on Main Street in the Herc Hero Hut. Tell him you have a mirror to teleport with, and he will go with you.

Go to Poseidon's realm. Hercules will kick down the rock, allowing you to get by. Go in the palace, and meet Poseidon. He will give you his trident. Now, go back to Hercules, and go to Hades' realm. Hercules will push the boulder aside, and you can enter the throne room. Meet Hades, and he will give you his crown. Now, go to Zeus. Hercules will smash open the padlock. Go inside. Medusa will appear, and Hercules will be turned to a stone statue. Go to the right, and use the drachma. Aeolus will give you a bag of wind. You go up to a ledge. Jump up the ledges and statues until you reach the top. If you fall to the bottom, talk to Aeolus and he will give you a refill. Once you get to the top, light the four statues of Zeus. Then, he will appear and challenge you to a fight. Now begins the final battle. Put on Hades' crown and Poseidon's trident and you'll emerge into a big god. In the battle, you must be doing two things: gathering pink clouds for energy, and shooting Zeus by clicking. When Zeus lights up, he can't be shot at, so don't even try. It takes a few minutes. It's just like the battle with Betty Jetty on Super Power Island, but you can't handcuff Zeus. Once you're done, Athena will congratulate you and you will get the medallion!

Difference between Classic and Remastered Version 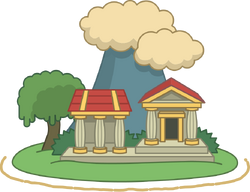 The Common Room on Mythology Island is the Midas' Gym. 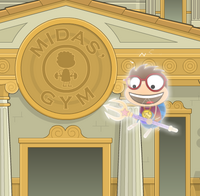 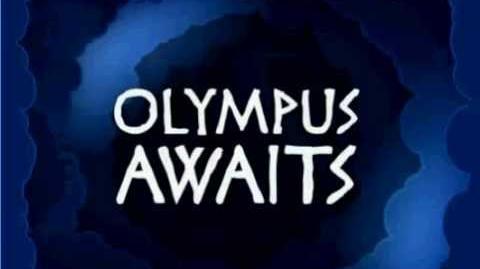 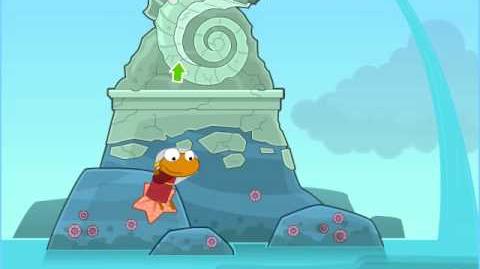