Game Show Island
Mystery Train Island was the 21st island on Poptropica, being released for Poptropica members on September 9, 2011 and for non-members on October 7, 2011. In it, you climb aboard a train and must solve a mystery before the Chicago World's Fair is completely ruined.

Getting on the Train

When you land on the island, go left until you find Thomas Edison trying to push his luggage onto the train. Talk to him and help him with that. Now you just have to organize the suitcases into size order (smallest one on the left side and tallest on the right side) and then click on the wooden plank. Edison then gives you the Train Ticket as a thank you and leaves. Now enter the train.

Now, before you talk to Edison, you have to talk with all the passengers on the train. Also, there's a Pencil in the VIP Car 2. Pick it up. Once you do all that, enter Thomas Edison's cabin.

Suddenly, the train stops. When you're outside, talk to the N.Y. Times Reporter. He just remembered that he heard footsteps heading towards Edison's cabin, and maybe they left a clue behind. Talk to the man on the left and he says he could use some fresh air. Then the train starts working again.

Race over next to Edison's cabin, where you'll find prune juice on the floor. Click it. Now head left to the Dining Car, and ask the Porter about the prune juice. S/he says s/he can't tell you what the passengers ordered and then s/he rips out the order from their notepad and tosses it off the train and leaves. Grab the Notepad, then use the Pencil to reveal an imprint of the orders. If you do that, you'll find out that Nikola Tesla ordered prune juice.

Tesla has locked himself in his cabin and he won't talk to you. Head to the Luggage Car. When you arrive, you'll notice that Tesla's suitcase has coal smudges all over it. Click on it and suddenly, a pair of Scissors is thrown at you. Grab them and go to the Coal Car. Find the Coal Man and ask him about the Coal Smudges. He says he did go for a snack but he didn't go near the luggage and tells you to ask the Porter. Go to the Vip Car 2 and ask the porter about it. (S)he confirms that it's true.

Now go to the Luggage Car, where you'll find Moreau. Talk to her, and she'll suggest that since you look like the Porter, you could dress up like him/her to get into Tesla's cabin. Enter the Porter Closet and pick up the Porter Outfit. Put it on and go to Tesla's cabin. He will let you in. When you're in, pick up the jug of prune juice on the table, then click on Tesla. He'll ask you three times to fill his cup, then he will need to go to the bathroom. While he's gone, check everything at least once, and you'll find the Luggage Key under the bird cage. Then Tesla will come back, and he will tell you to leave.

Head to the Luggage Car, and use the Luggage Key to open Tesla's suitcase, and inside you will find the Edison's Device! Click on it and Moreau will inform a security guard. Soon a guard appears forcing Tesla to go into the Coal Car. After that, you will deliver the device to Edison's cabin. He'll then remember that the device was running at the time of the theft and it could captured the thief's image. The footage on the device will show Tesla on the other side of the train during the theft and you will earn a Grainy Picture.

Tesla is now in the Coal Car, but the guard is blocking the way. So you have to go into the Luggage Car and go up through the door at the top of the car. Now that you're on top of the train, go to the right jumping from car to car, ducking under the tunnels and jumping over the lights until you find another door on the floor. Go down through it and you'll land in the Coal Car.

There you'll see Tesla chained. Give him the Pencil, and he'll give you a Sketch of His Cabin. Now go to his cabin. After that, click examine on the cabin sketch, then click use. Use the pencil to circle Tesla's briefcase, that is open. Then go talk to him again. He'll say that briefcase contained his most important invention and he has no idea how did somebody open it, since the key was still around his neck.

The Truth about Weisz

Go to Erik Weisz's cabin and ask him about the briefcase. He'll say, with an odd behavior, that he doesn't know anyone like that. Now go to the VIP Car 2 and ask the N.Y. Times Reporter about Erik Weisz's odd behavior. He'll give you a New York Times article. Now head back to Weisz's cabin, but he's not there. Pick up the Lock Pick Bag and Weisz will walk in.

Seeing that you know his true identify, Weisz runs away through a ceiling door in his cabin. Jump up there too. Now that you're on top of the train again, he'll run over the car roofs until fall into the Freight Car. Follow him, and when you land, you'll see something big with a large cloth draped over it and a rope tying the cloth. Use your Scissors to cut the rope and drop the cloth, and you will find Weisz trapped in his famous water tank. Now you have to unlock all the locks by lifting each pin to the red line with Weisz picks before he runs out of air. Once you do that, you'll save Weisz and confront him as the thief. But Weisz will prove himself innocent and tell you that if you find out what Tesla was hiding in the briefcase, you'll be close to uncovering the real thief. Then Weisz disappears in a cloud of smoke.

Go back to Tesla and talk to him. He'll agree that if you free him from the chains, he'll talk. Use the Lock Pick Bag to free Tesla, just like you did with Weisz. After that, Tesla will tell you that he was carrying a small Transformer, a device that can power the Ferris Wheel. Now, go to Twain's cabin and ask him about the Transformer. He will tell you that perhaps you should talk to that mysterious fellow in the last car.

Head left to a car known as Pinkerton Security. The guard in there is asleep. Try to pass to the car in the left without waking up the guard. Now you'll see President Grover Cleveland. Talk to him, and then you have to connect all the clues as he tells the story, and it will be like this: "When the lights went out, Nikola Tesla was peeping through Edison's door while holding a glass of prune juice. When he heard Edison coming back, he ran, sloshing the juice over the sides of his glass. (...) The thief then snuck into the Coal Car and hit the brakes, causing a distraction. The thief then took the device to the Luggage Car - Hence the coal smudges on the trunk. (...) Or was it? Perhaps the thief switched name tags between his own trunk and Tesla's. When the train stopped, the thief could have snuck outside and thrown the key into Tesla's cabin. The trunk you thought was Tesla's was the thief's all along! (...) That's just it! It was easy enough for the thief to access Tesla's cabin. Much harder to get at the thing Tesla never lets out of his sight, not ever when he went to the bathroom: His briefcase. (...) Precisely. the thief's real goal, all along, was Tesla's Transformer." Now, you'll realize that if you can identify the truck's owner, you'll identify the thief.

The Last Twist of the Tracks

Now go to the Luggage Car and use the Luggage Key to open 'Nikola Tesla's' trunk and pull away a sheet in the trunk to reveal a bunch of French stuff. You realize that the thief is French. Ask Gustave Eiffel about the French Items. He'll say that is a lady's handkerchief. You then realize that the thief is Mademoiselle Moreau. Then the train stops. You arrived at the Fair.

Suddenly, you appear out of the train at the Fair. Go left until you see Moreau. Her plan is to keep Paris and its World Fair on top, Moreau took the Transformer so the Ferris Wheel can't work. Then she runs away to the left. Follow her, and you'll see Moreau manipulating the Chicago Police into thinking that you're a bad guy. To escape the Police, jump up a ladder and try to get away from the floor. Pass all the obstacles and go to the left. Pass the Persian Palace Bellydancers and go to the very edge, and you'll find Moreau manipulating more Police, then she runs runs away again. Now jump from the canopy to the closest totem pole, and jump from totem to totem until you reach the last one, then go the left. Now you'll see Moreau climbing up the Wheel to escape you. Now use stringed lights and wheel cars to climb up the Ferris Wheel. Then Moreau tosses the invention off the Wheel. Now, quickly jump up to a hung-up rope and use it to swing across the other side of the Ferris Wheel, and on the way, you'll grab the Transformer. When you make it to the other side, continue climbing up until you confront Moreau. A close lightning strike will knock the thief off her feet and she will fall off the Ferris Wheel, landing in Weisz's water tank. Jump to the ground and give George Ferris the Transformer, then talk to Grover Cleveland, and he'll give you the medallion.

You're on the case!

Outside the Reverie Lounge

Mystery Train Island as shown on TV after Zeus's destructive reign during the events of Super Villain Island.

A Poptropican pushing Edison's suitcase up a ramp. 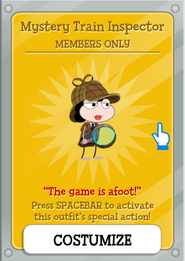 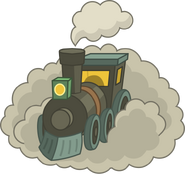 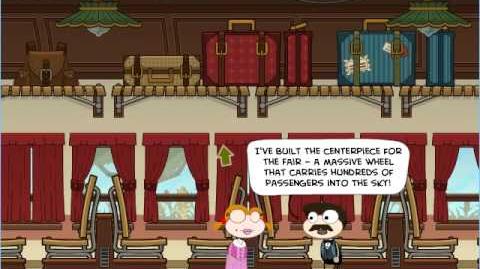 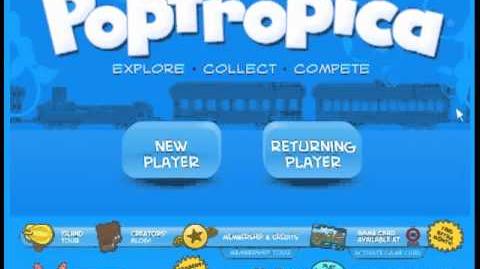 The Mystery Train Departs
The mystery train leaves the station.
Community content is available under CC-BY-SA unless otherwise noted.
Advertisement