Monster Carnival Island was the 38th island on Poptropica. It was supposed to be released in 2008, but strangely disappeared from the map. Left incomplete with all the Creators too busy with other projects to get it finished, it was finally completed and brought back 6 years later in February 2014. It was the sixth island made as a beta island and the fourth to be released with beta.

As soon as you come down from the blimp, go all the way right, where the sign says Carnival. You will meet a young boy named Edgar, a carnie in training. Edgar will ask you to come and help him with the carnival. It's Poptropica, so of course we say yes. Head right to the carnival. Head right, and you will see a man with a tooth sticking out, standing next to a duck game. Talk to him. You will need to get him a hose. Head right again and you will see a woman in front of the Fried Dough stand. Talk to her, and she will ask you to bring her some powdered sugar. She gives you a formula to go make it.

Head back left, all the way past the blimp to the apothecary. Go inside. Talk to the man behind the counter. After the last speech bubble, he will ask you to fill out an order (sodium chloride) for him. Go upstairs, so you can make the sodium chloride (it's just table salt). You will need sodium hydroxide and hydrochloric acid. They will be in the two cartons on the top shelf to your left. Now click on the machine. Use your tool to blow the atoms apart, and to make the yellow ones stick together, and the blue ones stick together. Now, you will have salt. Give it to the pharmacist. He will take it. Click on him again, and your avatar will ask to use his lab again. He says yes.

So, go back up, and gather the ingredients for the sugar. When you stand by the machine, there will be two cartons just to your right, one on a low shelf, and one on a high shelf. Fructose and Glucose. Gather them and put them in the machine. Do the same thing as last time, but put the purple ones to the purple ones and the blue ones to the blue ones. Exit the apothecary and head left to Honest Gabe's.

When you walk in, ask for a radiator hose. The woman will give you one, since a motorcyclist without a radiator hose is apparently an emergency. Climb up a shelf right to the right, and there will be a hose up top. Grab it. Then, exit the auto dealership and head back to the carnival.

Use the hose, and your avatar will automatically attach it to a faucet, and into the pool, where it will fill up with water. Then, head right, and give the woman the sugar. She then will give you some Fried Dough. It will come in handy late. Now, head all the way right to the carnival rides. Talk to the guy with the sunglasses by the Ferris wheel. He needs a new lever to stop the Ferris wheel from going too fast. So, head right until you get into the woods. There, you will find a lever on the ground. Pick it up, and head back to the man by the Ferris wheel. Give it to him, and the wheel will slow down. Now, go left to the next scene, where Edgar will congratulate you for helping the carnival.

It will be evening then. Walk right to the Pop The Balloon game. Talk to the little boy. He will give you a blunted dart. Head left to Honest Gabe's. Once you enter, to the right there will be a metal sharpener. Use it to sharpen the dart. Go back to the carnival, and use the dart on the Pop The Balloon Game. When you win, Edgar says the teddy bears are only for display, so instead, he will give you a cup. Now, head up past the mirror maze, and to the Weight Guessing Game. Click on the man, and he will correctly guess your weight! Now you need something to fool him. Head to the Apothecary. Ask the man behind the counter for something to fool the guesser. He will say you are welcome to whatever you can find.

Just to your right, there will be some boxes with a small colorful box on top. Click on it. Inside it will be a paper and bottle. Take the bottle. Go back to the Weight Guessing Game. Now the man will not guess your weight right, and you will win a super bouncy ball. Head right to the next scene, and past the Tunnel of Love, there will be what looks like a heavy-weight champion. Click on her, and she will give you the hammer to try your strength. Infant. Use your super bouncy ball to make it so that when you hit the target, the fist bounces way up. She will give you the hammer as a token of her admiration because you were so strong. She also adds that you and her should pump iron some time. Uh, no thanks. Now, head back left. The ferris wheel will have stopped!

Get a cup of fry oil from the woman at the Fried Dough stand and use it on the ferris wheel. The kids on board are saved! Head right to the Tunnel of Love and talk to the man in front of it. He'll give you a flashlight and tell you to go get a scary mask from the Haunted Lab to scare some teens who are getting a little handsy inside. Go into the Haunted Lab. On the top floor to the right, there's a mannequin with a mask on so it looks like a fly-human hybrid. Grab the mask and go to the Tunnel to scare the teenagers. Once you're out of there, you'll find out that the carnies have all run off into the woods.

Follow the trail of trash—it'll seem like you're running in circles, but you aren't. Eventually, you'll stumble upon a cult-like ritual, where a strange hooded figure is turning the carnies into monsters, one by one. Your Poptropican will run away and escape.

Head to the Haunted Lab and go to the top floor. On top of the shelf is a box of black lights; pick one up. There's a monster in the Haunted Lab, but it can't knock you back or anything—all it can do is scare you for a second or two. Use the flashlight and be patient and you'll be fine.

Head left to the duck game. On your way, you'll pass the Fried Dough woman's monster form, a gelatinous blob. She's harmless, and if you click on her, she'll give you a big smile. Use the black light, equip the flashlight, and play the game. Catch the ducks in this order: Green, Orange, Red, Yellow. Now you have the chemical formula. Unfortunately, the apothecary is closed.

Go into Honest Gabe's and jump on the left platform. Click both up arrows, jump to the vents, and head left. You'll end up behind the newspaper stack and vent in the apothecary. Click on each newspaper to discard it—however, each one has a bit of information about the history of the island, so you might want to read them.

Exit the vents and choose the three chemicals you haven't used yet. They're all together. Perform the same reaction as before, and you'll get sodium thiopental. Go back to Ringmaster Raven's tent. Edgar is hypnotized, and he will kidnap you and put you in a machine to turn you into a monster, too! But all hope is not lost. Use the Fried Dough to bring back his memories, and he'll help you chase Ringmaster Raven to the Mirror Maze.

Ringmaster Raven will use the maze to hide. Keep a close eye on where he appears and smash the mirror you see him in last with a hammer! He'll keep hiding in other mirrors, so keep smashing them. Eventually, he has nowhere to hide, and you'll be able to hypnotize HIM this time. He promises to never hurt anyone again. Also, he believes he's a chicken now.

The carnival is all packed up and ready to move on to the next town. Go right and talk to Edgar, and he'll show you their new attraction—The Incredible Chicken Man. He'll also give you your medallion. Congratulations! You've completed Monster Carnival Island.

History of the Island

The island was meant to be released in 2008, even pictured on the map with the words "COMING SOON!" displayed beneath its icon. However, for previously unknown reasons, it was scrapped. Monster costumes were accidentally leaked into the Poptropica Store, but were quickly removed upon discovery.

Later still on February 3, 2014, Captain Crawfish officially announced on the Creator's Blog that Monster Carnival was never released because it was announced too early on without being finished back in 2008 and none of them were able to complete it, having other projects to work on. The name kept popping up in the discussions for new islands every year. Everyone agreed that it should be revived and sure enough, it was.

Multiple times it had thought to be returning. Sneak peeks of monster-related islands were posted on the Daily Pop, but they turned out to be sneak peeks for Cryptids Island and Zomberry Island. When a sneak peek of what seemed to be a carnival appeared, some people assumed that it was for Monster Carnival Island. However, it was meant for the Carnival Costumes store on Night Watch Island. There are four monster costumes currently in the store that resemble the previously leaked costumes. On the Creator's blog, a post by Captain Crawfish revealed notes for a "Haunted Amusement Park Island," supposedly an early name for Monster Carnival Island. At the end of the blog post, Captain Crawfish quotes: "You never know, I guess.," hinting at its return. A piece of paper in the trash can of Mocktropica Island had the words "Monster Carnival NOPE" on it.

On the Poptropica Creators' Blog, Captain Crawfish announced that Monster Carnival Island would return in February 2014, with all new features and members' only items soon to be released. The teaser trailer only revealed a picture of a mysterious ringmaster-like Poptropican with a black bird mask and red monster eyes. 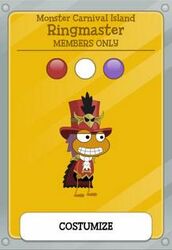 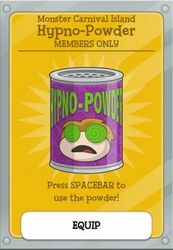 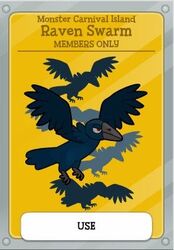 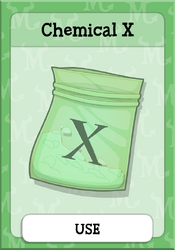 Chemical X (turns your Poptropican into a monster) 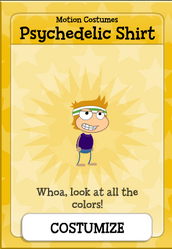 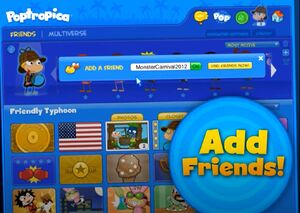 The Poptropica user known as "MonsterCarnival2012"

Notes for a "Haunted Amusement Park Island," most likely an early concept of Monster Carnival Island, as one note mentions a "ringmaster" with "zombie workers"

Ringmaster Raven, the main antagonist of the island, as seen in the trailer

Edgar, one of the primary characters and a young carnie who serves as an ally to the player

Dr. Dan, the owner of the town's apothecary and a minor character who develops a more important role in the Island's bonus quest 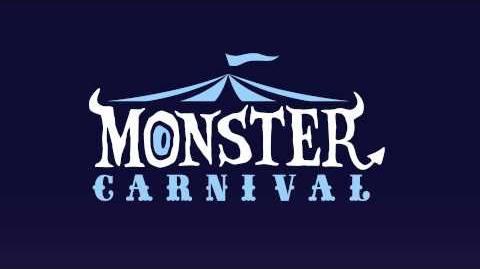 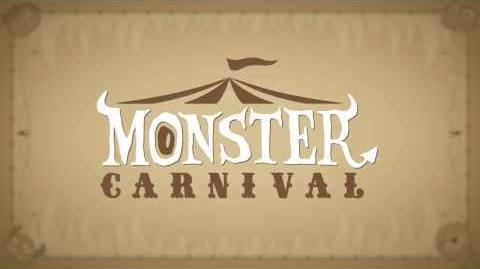 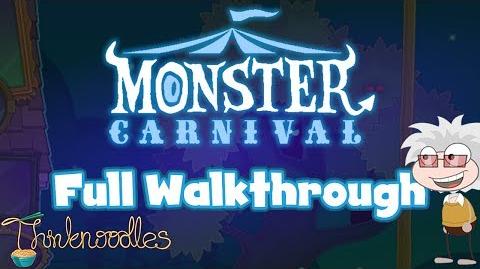