Merlin is a robotic owl built by Mordred that originally served as his companion using the brain and the DNA of a barn owl.

Merlin was created by Mordred to serve as his companion. Mordred was able to create a robotic owl and put a barn owl's brain inside to create Merlin. He was probably fed Mechanical Mice. But the King and Queen thought cyborg creations, like Merlin himself, were illegal and unnatural. Mordred was locked up in the dungeon for Merlin's creation, but Merlin soon helped his master escape. After Mordred tunneled his way out of prison and resumed work in his Lab, the royal guards discovered the location of Mordred's Hideout and prepared to put him back behind bars once again. Mordred escaped into the skies in a spacecraft he had not yet completed before the royal guards could capture him. Mordred probably left Merlin to stay at his Hideout because there probably wasn't enough time for Mordred to bring him along. In the hideout, he entered a sleep-like state.

Inside, the Princess was in a cell and Mordred had gotten into a robot with two spinning blades, bombs, lasers, and a futuristic heat-seeking Shuriken. Merlin then flew in, and Mordred realized that he was a traitor. Mordred fired a Shuriken, but Merlin evaded the weapon. Merlin grabbed two bombs and dropped them on Mordred and his robot. Mordred then fired a laser at Merlin, who fell to the ground to his demise. The Chosen One ran in and jumped on Mordred's robot, and then jumped on two chandeliers. Mordred fired at the chandeliers, which fell on his robot, and then knocked the Green Fuel Orb off of the robot. Mordred drove his robot away, and then jumped out and tried to steal the Orb once again. The Princess was freed from her cell and knocked Mordred out. The Chosen One and the Princess took the Orb and Merlin back to the Kingdom of Arturus. Power was once again restored to Arturus, and the Princess had Merlin repaired and back to normal.

Merlin himself does not appear on this island, but when the Player ventures into Mordred's mind, his mind creates Merlin as a slave. That figment of Mordred's imagination, however, is actually evil. This Evil Merlin was originally inside a blueprint, but he was created when your Poptropican entered the room at the time. After that, Evil Merlin tries to knock you over and pick you up continuously until you leave the room. Evil Merlin is red and a darker shade of grey instead of blue and light grey, he is much larger than when you see him on Astro Knights and he can easily lift you up. It appears along with the Evil Mechanical Mouse. 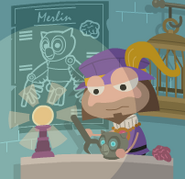 An illustration from The Tale of Mordred: A Cautionary Tale depicting Merlin's creation.

Merlin obtaining the Green Fuel Rod for his new master. 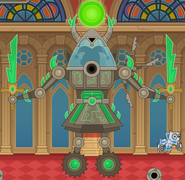 Merlin flying towards the ground in a fight against his former master, Mordred.

Mordred's Merlin, a figment of his imagination, in the trailer for Super Villain Island. 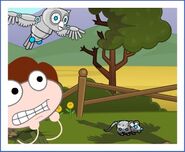 The Way to an Owl's Heart is through its Stomach./A Little Kindness goes a Long Way.

Merlin on the cover of the Astro-Knights Island book.

Merlin in the Castle of Arturus 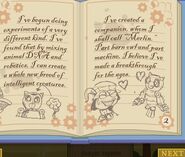 Retrieved from "https://poptropica.fandom.com/wiki/Merlin?oldid=116446"
Community content is available under CC-BY-SA unless otherwise noted.