The Medicine Man wears a wide blue mask with green leaves and shark teeth along with a yellow shirt and grass skirt. He is holding a long, wooden spoon, stained with a green liquid in one hand and has a smiley face necklace around his neck. He will also only talk to native islanders. 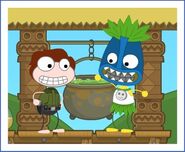 Retrieved from "https://poptropica.fandom.com/wiki/Medicine_Man?oldid=119662"
Community content is available under CC-BY-SA unless otherwise noted.