Cryptids Island
Great Pumpkin Island was the 15th Island on Poptropica. It is a Halloween Island, based on the PEANUTS series and the classic television movie: It's the Great Pumpkin, Charlie Brown.

Halloween is here, but not all of the PEANUTS kids are celebrating - not when Charlie Brown keeps getting tricks instead of treats, Snoopy is attacked by the infamous Red Baron, and Linus waits all night for the Great Pumpkin. Can you set things right in this online virtual world and save Halloween?

Land on Main Street in Great Pumpkin Island. Go right to the Pumpkin Patch. Talk to Lucy and Linus. As you might know, Lucy is very demanding, and this time, she wants the heaviest pumpkin. Using the scale, find the heaviest pumpkin and drag it to Lucy.

Accept Linus' task of delivering the pumpkin to the Van Pelt House. Roll the pumpkin all the way to the house while avoiding the obstacles. Once you've done that, Linus will give you a Trick-or-Treat Bag. Then Lucy takes out a big knife and stabs the pumpkin, scaring Linus. Who thinks she killed the pumpkin.

Exit the house. Walk over to Pig-Pen (the dirty guy outside the house) and give him your bag. He will give you a lemon-flavored Sucker that he doesn't like. How nice! Go back to the Van Pelt House and give Linus the sucker. He will give you his Party Invitation. Get Linus' Pen from his desk and then exit the room.

Go left to Charlie Brown's Backyard. Talk to Charlie Brown and a mini-game will start. You play as Snoopy and you will have to blow 5 falling leaves into the big pile. After that, find Linus at the mailbox on Main Street and talk to him. He will say that he lost his blanket. Go back to the backyard and search through the leaf pile. Once you find Linus' Blanket, bring it back to him.

Go back to the backyard. There, you will get to experience the most famous scene in Peanuts, the "Football" Scene. Lucy is holding a football and asks Charlie Brown to kick it but Charlie refuses, saying that she will swipe it away when he's about to kick it. However, Lucy states that she will sign a document stating otherwise. Charlie Brown then complains that he doesn't have a pen. Give him the pen and he will sign the contract and attempt to kick the ball. Lucy swipes it away at the last moment and Charlie Brown flips on his back once again. Lucy then catches the document out of the air and says that it was never notarised. She tricked him. Then they walk away. Pick up the Football. Walk over to Snoopy's kennel and use the football. It will cause Snoopy's pilot hat to fall down onto Snoopy's head. Thus begins another mini-game.

You will play with Snoopy again as a British ace World War pilot who is with the Triple Entente entering territory of the Central Powers. His doghouse will be a Sopwith Camel and you are trying to evade the Red Baron, which is Woodstock, as he is dropping bombs and firing at you. Survive for one minute, and you will crash-land in enemy territory. Spotlights are searching for you, so hide behind rocks, trenches, and avoid the spotlight. Continue right until the spotlight disappears. You will then find a scarecrow with a Halloween Mask. Take the mask and wear it. Go into the house and enter through the door.

You discover that it is the Halloween party. Here, you have to win all the party games:

After winning every game, everyone will go out for trick-or-treating.

Return to Main Street and go trick-or-treating. At each house, knock on the door, try to collect candy and try to avoid the rocks. When you have collected a sufficient amount of candy, you will get a Bag of Candy.

Return to the Pumpkin Patch. Give Sally your candy. You will hear something and Snoopy will appear with a pumpkin on his head. His shadow will appear and disappear briefly. Realizing it was a prank, Sally leaves Linus. You stay with him. A few hours later, Lucy takes Linus home. As a reward for taking care of him, Lucy gives you the Island Medallion. Congrats! 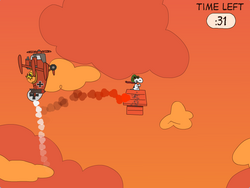 Click here to see the gallery for Great Pumpkin Island.

The multiplayer room on Great Pumkin Island is the Flying Ace Cafe. 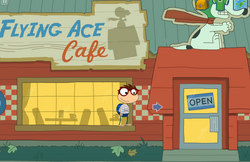