Goblins are fast humanoid creatures that are found in Twisted Thicket Island.

Goblins resemble short green humans but wear strange clothing and have claws and tusks. Their eyes are hidden under their caps but some have hats that show one of their eyes, which is red and lacks pupils. They often carry red spears.

Goblins believe there is strength in numbers and attack in swarms. They can also run extremely fast, even while they're running, and even to the point of appearing as a vanishing blur.

After battling the Nøkken, a swarm of goblins will begin chasing after you. You have to jump over obstacles quickly and grab the rune at the edge of the forest and escape. After you escape the goblins fall off the cliff into the water below. 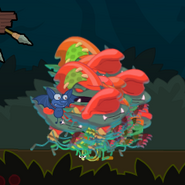 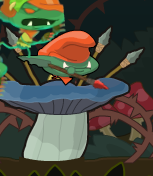 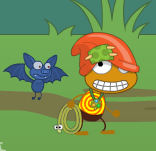 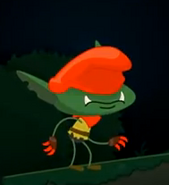 The goblin in the Twisted Thicket trailer.

A petrified goblin
Add a photo to this gallery

Retrieved from "https://poptropica.fandom.com/wiki/Goblin?oldid=115490"
Community content is available under CC-BY-SA unless otherwise noted.