Shark Tooth Island
Early Poptropica Island was the 1st island on Poptropica. It was released in September 2007 when the game first started.

3 items belonging to the Pilgrims have been stolen, and you have to find them. Starting in the sewers, you'll find a lost Prized Porker, then a Golden Egg. The egg can be given to a Purple Giant in the sky, who will let you pass into his garden. There, you'll find a Water Bucket. You'll then find an Aircraft Graveyard, and obtain a Jet Pack, which you will use to get back down to earth. You plop right onto the top of a water tower, which happens to be where the last stolen item is - a Signal Flag! Returning the stolen items, the village can function again - and with the flag raised, a ship comes in the port. The traveller on the ship awards you the island medallion.

Walk to Early Poptropica and talk to the Pilgrims. Go down the well and into the Storage Cavern. Jump into the water and go up the platforms on the left. You should find the Glow Stick.

Walk back to Main Street and go down the manhole and into The Pit. Walk down the platforms, avoiding the spiders, until you reach the bottom. Jump over the giant spider and get the Prized Porker.

Talk to him and you will give him the Golden Egg. He will let you pass and walk to the Giant's Garden. Grab the Bucket and walk right into the Aircraft Graveyard.

Use the propellers to jump over the obstacles until you reach the Jetpack. Walk back to the Giant's Garden and use the Jetpack to reach the exit. Once you land on the water tower, grab the Signal Flag and jump down.

Walk back to Early Poptropica and talk to the Pilgrims. After you give the last Pilgrim the Signal Flag, a ship will dock. Talk to the Pilgrim with a green hat and he will give you the Medallion.

These pictures are collected in your Poptropica photo album in the profile section. Click to enlarge. 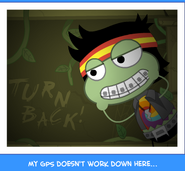 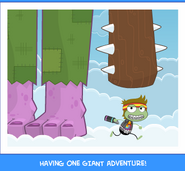 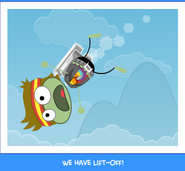 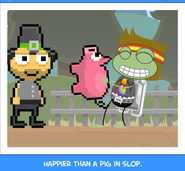 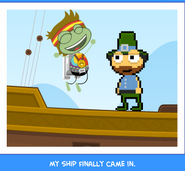 To see the Gallery Walkthrough of this island, click here. 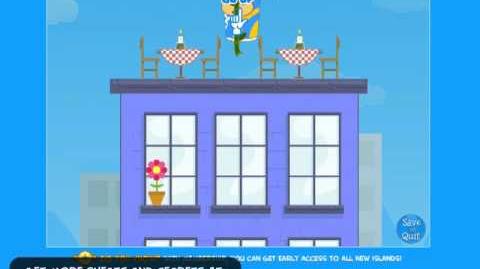 Retrieved from "https://poptropica.fandom.com/wiki/Early_Poptropica_Island?oldid=122881"
Community content is available under CC-BY-SA unless otherwise noted.