Male
Dr. Spyglass is an eye doctor on Spy Island, which is his cover for his actual job: A scientist who creates devices for spies. He may also be an ex-employee of PASE.

He first appears when you ask for an eye exam. You might be wondering "why is he completely ignoring the upstairs?" If you choose the opposite of whatever symbol he points to the eye exam (e.g. if he points to the symbol pointing upwards you choose the symbol pointing downwards etc.), he reveals himself not only an eye doctor, but the professor of secret operations for the lab! He leads you upstairs will you will see all kinds of gizmos and gadgets. He tells you they're just prototypes; he already gave the working inventions to other spies. He gives you his last working invention, the Chameleon Suit. This is extremely useful when sneaking past BAD guards and dogs.

He only appears in this part and does not appear in the story after this.

Dr. Spyglass used to be a member of PASE. In the quest he helps you decode the alien message. While you are decoding the messages, a PASE ID card is shown with Dr. Spyglass on it.

Note what's inside the red circle. Could Dr. Spyglass be returning? 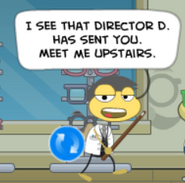 Retrieved from "https://poptropica.fandom.com/wiki/Dr._Spyglass?oldid=122575"
Community content is available under CC-BY-SA unless otherwise noted.