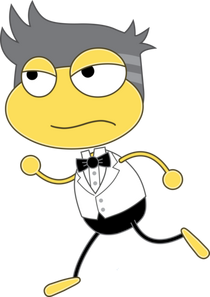 Male
Director D is the villain of Spy Island, and the leader of B.A.D.

Director D has a grey toupee, a black bow tie, along with a detailed white tuxedo with black pants.

When you first meet Director D, he recruits you to take down B.A.D. and gives you the Decoder Kit. If you visit him again before you get to the satellite, he gives you hints. However, once you turn on the satellite teleporter for him, he reveals that he is actually evil and is behind B.A.D. Once you defeat him, he is locked in a cage at the HQ and cries.

Director D is both the Director of Agents and the leader of B.A.D.

You meet him at the Spy Headquarters. He recruits you as an Agent and gives you the Decoder Kit to help you read hidden messages. You rescue three agents, who all give you important items to take down B.A.D. When you get past all of B.A.D's traps, you trigger an alarm that locks you in a cage.

Director D comes and shuts off the lasers. He then tells you to enter the passcodes you received from the agents into the teleporter machine. Once the teleporter is working, he laughs in your face and reveals that he was behind B.A.D. all along -—- and you just made it possible for him to carry out his evil plans!

When the two of you arrive at the B.A.D. satellite through the teleporter, Director D remarks, "I won't need this ridiculous toupee any more!" He then takes his hair off and jumps in a special vehicle most likely created by B.A.D. He sends four Mini-Bots to attack you, and you must make them attack the orbs powering the satellite. Director D then starts his machine up and flies after you. You lure him into crashing into the ceiling using the grapple bow tie multiple times. His vehicle is destroyed, so he gives up.

You return to Spy Island with Director D, who loses his Director status and is put in a cell. The Top Secret Secretary then promotes you to Director status, and awards you with the Spy Island Medallion. Director D now cries in his cell and says, "It's not fair!" in the HQ on Spy Island.

He also appears in Reality TV Island as a contestant.

Director D without his toupee.

Director D. crying in his cell.
Add a photo to this gallery

Retrieved from "https://poptropica.fandom.com/wiki/Director_D?oldid=122047"
Community content is available under CC-BY-SA unless otherwise noted.