After landing on Main Street, talk to the guy with a soccer ball and he will ask if you have seen one flyer. He then hands you a flyer, and the flyer says Harold Mews is offering a $1,000,000 award for proving the existence of cryptids. Then go right. There you will see a gardener. Talk to him. He will say it is very hot. Then jump up the tree and you will get a $5 bill. Go back and into the general store. Talk to the guy and buy a sports drink. Go back and give the sports drink to the gardener. He will tell you to hold the Gardening Shears while he takes a break. Go back to main street and go left. You will see one guy going up in a hot-air balloon saying "Loch Ness, here I come!" Then go until you see a woman with a hang-glider. She will say, "Will you give me a push?" Give her a push and jump on the top of that house. There will be a guy in a hot-air balloon telling that he cannot get his balloon off the ground. Use the gardening shears to cut that guy off the ground. He will say "Up, up, and away!" and you will get a nylon rope. Go back into main street and go into the kite store. Use the nylon rope and you will ask that if the nylon rope in strong enough for the Windsurfer X250. The shopkeeper will say it's perfect and to go and enjoy. Then take the Windsurfer X250 and go left and in to the sea. Use the Windsurfer X250 and you will start windsurfing. After a few seconds, a woman will appear and tell you that you might as well give her the prize money. Then she will send up fire balls and your Windsurfer X250 will get destroyed and you will sink. Then a helicopter rescues you and you faint. You will wake up in Harold Mews' mansion on a bed and you will ask him what happened. He will say that you were sabotaged by Gretchen Grimlock, a ruthless fortune hunter. He will tell you to meet him in the foyer and go away. Drink the glass of water and go outside and down the stairs and into the museum. Harold Mews will not be there. You have to watch five videos by clicking the play button about Bigfoot/Yeti (unconfirmed), The Giant Squid (confirmed), the Chupacabra (unconfirmed), the Loch Ness Monster (unconfirmed) and the Jersey Devil (unconfirmed). You don't need to watch the whole video, you just have to click the button and watch for a few seconds. Mews will come and tell you that he is giving away prize money because if the Giant Squid exists, he thinks the others exist too. Then he will say that you will have to find the remaining cryptids. Go outside and into the helicopter and choose the location. It has to be done in this order.

Land in Loch Ness, and go to a man with a truck. He will tell you to help with getting his truck unstuck. Then click under the left wheel and then it will show you the wheel, find the wheel release the air hold until it stops. Then he will give you a camera. Go to the pub, pick up the matches and defeat this guy to a game of darts. After defeating him, you will get a rowboat ticket. Go back and use the ticket for the rowboat. Then you will see something like Nessie. You will tell him to go closer but he will refuse, saying that it is dangerous out there and he will tell you to take a photo. Take a photo and go back to Mews. He will say they were just truck tires. Go back to Loch Ness and talk to the rowboat man. After telling him about the police, he will run away. Then go back to the pub and defeat this couple to another game of darts. He will give you a submarine ticket. Use the submarine and go to the bottom left part of the lake. Take a picture of the supposed Nessie. When you go back to the pub, show it to the two men and one of them will show you an article on the notice board that will say that it is also fake. The stubborn darts man by the door will challenge you again. You need at least one bulls-eye to win this time. He will refuse to give you anything, but the pub owner gives you a penny whistle to summon Nessie. Take the rowboat out, but the waters are too shallow. Go to the left again to reach a cove. Use the penny whistle and Nessie will appear out of the water! Take a picture. When you go back to Mews, he confirms Nessie's existence.

Go to the Himalayas then go to the right. Head to the top of the left mountain and find the young-looking man. Ask him to be your Sherpa and he will take you up the mountain. To get up the mountain without getting blown off, you have to jump ahead of the Sherpa and tie your rope to one of the rings. You can skip rings if you're fast enough. If you fall off but your Sherpa is tied on, you can climb back up the rope when it stiffens. When you reach the top of the mountain, go inside the temple and talk to the head monk. He will give you a lantern, which you must light with the matches. Go outside again and up to the roof of the main building. The monk up there will challenge you to a board game, where you have to get the Yeti past the hunters from one side to another. To avoid being cornered, jump diagonally up and down. After winning, the monk will let you through. Jump up to the roof of the building on the right, then run up the rocky cliff until you spot a supposed Yeti footprint. Take and picture and head back to Mews. He will say that it is just a boot print and that there is no point in looking in the Himalayas anymore.

Head to Puerto Rico. Here, you'll find the same hot-air balloon man you helped earlier. Head all the way to the right until you see him standing with the farmer. Talk to the farmer and he will agree to lend you his jeep. Now you have to drive to all the stars except the one somewhere in the middle, which will be visited later on. You will crash through some fences and maybe scare away some goats, but these do not matter. The farmers of the other farms tell you these important clues: The chupacabra attacks goats in groups of three or more, it only goes after spotted goats and seems to hang around Snaggletooth Rock. The farm on the top left hand corner has a pair of wire clippers which are needed later. They are located on the right, on top of a rock face. Use the springy sticks to jump up and take them. The farm in the top right hand corner, a chicken farm, is where the farmer's brother is. He takes the seed, and says that the chupacabra attacked the farm. On the barbed wire fence, take the fur. When you go back to Mews, he asks you to take a DNA sample. Follow the instructions on the screen EXACTLY IN ORDER AND IN THE RIGHT PLACES. Carry the chemicals slowly, as they might spill if you move them too fast. After the analysis, Mews tells you that it's just coyote fur. When you go back to Puerto Rico, the farmer will decide to trap the chupacabra. Use the jeep to corral three spotted goats into the jaw-like part of Snaggletooth Rock. Do it slowly, there is no need to single out the spotted goats, just herd all of them. Go to Snaggletooth Rock, hiding behind the rocks that the farmer hides behind, and the chupacabra will appear! The trap doesn't hold it for long, and it escapes, but leaves behind one of its teeth. Mews confirms the existence of the chupacabra.

P.S. The Chupacabra tooth can be retrieved again from the same place you found it.

Head to New Jersey. Use the bolt cutters to open the trash bin and search inside for the 'tablet' (assumed to be a toilet door). Go inside the restroom and your character will attach the tablet to the one already inside. The message tells you how to ride through the forest. This is optional, but outside the gas station above, you'll find the woman with the hang glider you also helped earlier on. You can talk to her and free her, but again, this is optional. Take the motorcycle outside the station. Follow the instructions (right, left, left, right, right, right, left, left) by taking a turn when the road splits. In the seemingly empty clearing, click the look around button. Light the lantern, then take a look around and you'll see the creepy house. Inside the creepy house, go up to the second level, where you hear a banging from the attic. Push the dresser to the far left and use it to jump up to the ladder going to the attic. In the attic, the banging is coming from a barrel. It was a raccoon! Go to the right of the barrel and pick up the grappling hook. When you go down, the Jersey Devil is sighted in the window, which then disappears outside. When you go out of the house, the Jersey Devil is seen again, but this time it flies up to a strange nest in a tree, which seems to have egg fragments in it, and disappears into the night. Use the grappling hook to reach the nest and take an egg piece. Then go back to the motorcycle. To go back to the start quickly, simply click the back to start button. Mews asks you to take another DNA sample, and it proves the Jersey Devil's existence, as well as it's nightmarish appearance.

When you prove the existence of the Jersey Devil, Mews will tell you there has been a Bigfoot sighting in the Pacific Northwest. Go to the helicopter and the Pacific Northwest will be on the computer. Click it. Once you get there you must play a mini-game where you chase after the Bigfoot and not lose sight of him, until he runs into a cave. On the helicopter comm. system, Mews will contact you, and you will tell him you have spotted Bigfoot and it ran into a cave. Then Gretchen Grimlock will hack into it, and explain her plans to capture Bigfoot, and pay people all over the world to look at him. Now you have to chase her helicopter. Now you will appear standing at the edge of your helicopter. Jump onto Gretchen's and pull the cap off her fuel tank, which will start to empty out. Now you have to save Bigfoot before the helicopter crashes. Jump down onto the cage which is hanging from the helicopter by a rope. Cut it with the Gardening Shears you collected earlier. The cage will start to fall and the emergency parachute will activate. You've saved Bigfoot! Back in the lab, Mews will thank you but say he can't make a habitat for Bigfoot because he spent a lot of money searching for Cryptids. You will give him the reward for finding the Cryptids to help Bigfoot, and he gives you the island Medallion. Congratulations! 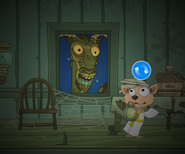 Nessie in the river. 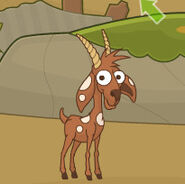 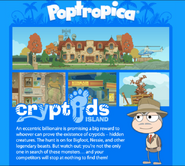 The Common Room on Cryptids Island is Bert's Bed and Breakfast, located on Main Street.

Bert's Bed & Breakfast, the multiplayer room
Add a photo to this gallery 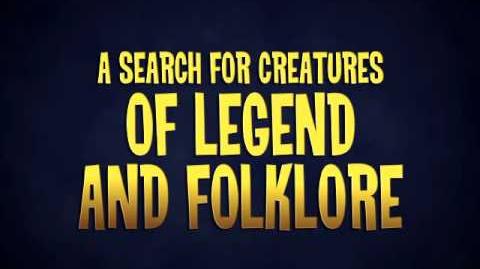