Male
Crusher is one of the six villains of Super Power Island. He is located in the junkyard.

Crusher is really angry and not afraid to hurt anybody with his violent antics and personality.

Crusher has brown skin, prison clothes, earrings, and a scar on the right side of his face.

Before the mutation, Crusher stole a monster truck and smashed every car in a parking lot. He went to the County Prison for it. When the meteor struck, he escaped and went to the dump. The police couldn't stop him, so a hero did.

There are two parts in defeating him. In the first, he will regularly stomp the ground, causing the ground to shake. You have to climb up to the crane, pull the lever and drop the refrigerator on Crusher. Once you do that, he'll pick it up and throw it at you. You will then fall. From there on, Crusher will start tossing oil barrels at you. Avoiding them, climb back up to the crane and turn the magnet back on. This will cause the magnet to attract the platform Crusher is standing on and squish him in between. After that, he will be returned to the prison.

Crusher appears as an outline in a video in Game Show Island, as told on the screen of robots talking.

Crusher, along with the other Super Power Island criminals and other villains from the past, are in Erewhon. If you click on him, he says: "Row, row, row your boat."

Crusher is crushed by a refrigerator 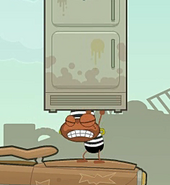 Crusher picks up the refrigerator
Add a photo to this gallery
Retrieved from "https://poptropica.fandom.com/wiki/Crusher?oldid=115227"
Community content is available under CC-BY-SA unless otherwise noted.