Male
Crazy Comet is a character on 24 Carrot Island. He is the last person to save and was once kidnapped by the notorious Dr. Hare. He also helps your Avatar out of the lair of Dr. Hare. He works on Dr. Hare's computer, and even stops you from using it until the player frees him from the Drone Ears. Then, he warns the player about Dr. Hare's Rabbot and his real plan. You then crash Dr. Hare's Rabbot into a few asteroids before destroying it and having Dr. Hare blow up in space.

He has curly brown hair with tan skin and wears a blue and white number 8 shirt with blue leggings. 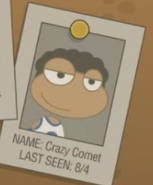 Retrieved from "https://poptropica.fandom.com/wiki/Crazy_Comet?oldid=122759"
Community content is available under CC-BY-SA unless otherwise noted.