Reality TV Island
Counterfeit Island was the 10th island on Poptropica. It is a crime scene investigation themed island released on January 4, 2010.

Arrive on Main Street. Jump to the top of the museum, and get the first piece of the Torn Picture. Go right, and go to the top of the "Moldy Baguette Inn" building. There is a piece on one of the window sills. Go right to Down Town and enter "Bobo's Clown Store," and get a green balloon.

Go outside, and find the open garbage can (not dumpster). Push everything away until you find Underground Tunnel Tour Tickets. Go right to Country Side and give the green balloon to a crying boy. He will take it and start flying away. Return to Main Street, enter the "Web Browser Internet Cafe" and give the tickets to the man. He will return you one Underground Tunnel Tour Ticket.

Return to Down Town and go to the woman next to the "Underground Tunnel." Use your ticket, and you will be able to go to the Ancient Tunnels. Go through the tunnel until you find a place with human bones. Climb up the light, and jump to the right to get another Torn Picture piece. Then, keep going until you reach the end. When outside on the Docks, talk to the shady guy, who will tell you the Scream will be stolen and also tells you to apply for a job at the museum. Before you leave the Docks, there are two more pieces, one close to the sand and one on the boat.

Inside, talk to him yet again and he will tell you to select a station. After you do all of the tests, he will give you the Supply Room Key. Go through the "Statue Room," find the "Supply Room" and use the key to open the door. The final piece is there. Grab it and return to the Docks.

Go through the tunnel exit. Find a ladder, climb it and click on the door. You must make it look exactly like the Torn Picture. When it is, push the top button and the door will open. Go up and you will be back in the "Supply Room." Open the door again with the key, then go out. Duck when the security guard comes to not be caught and go to the "Statue Room." Avoid the laser beams by hiding behind statues and potted plants and go to the "Main Hall of Paintings." Go to the left, and click on the Scream. You will get arrested by police officers. In the "Police Station," you will take a lie detector test. Once you pass it, the lady inspector will tell you that someone else stole the painting. Go back to "Bobo's Clown Store", and go to the left to talk to the security guard from the museum. He will give you a timecard.

Now, go back to the Museum Fantastique and go to the "Security Office." Click on the monitors, and you will see that the shady guy stole the painting. Take a printed screen copy, then return to Down Town and show the print to the mimes, and they will whistle. This indicates that you should go to the "All that Jazz Cafe." Go inside, and go near the stage. The shady guy is there. After you talk to him, he will run away, and you have to follow him. Go outside and he will run away on a scooter. You will also ride a scooter to try to catch him. Avoiding everything except for ramps, you have to keep running after him until you reach to the Docks. There, he will jump on a boat and escape, but he drops a Key Card. Pick it up. Then, go back to the Museum Fantastique, talk to the assistant curator again and he will give you the Van Gogh's Starry Night. Examine it with the x-ray device and it says: "Meet me at the museum in Early Poptropica Island."

Go to Early Poptropica Island. Go in the "Pop Art Museum," go to the left, talk to the woman, and she will give you a Key. Go back to Counterfeit Island, and go to the Country Side. Find the house that says "Inspector Veuve-Noire" and use the Key to open the door. Enter the house, go to the upper level, click on the torn edge of the weird painting, and it will be revealed as the missing Scream. Then, the lights go out and you are knocked out by someone. You will arrive in the Underground Hideout, the hideout of the Black Widow, notorious art thief. After question you, she will walk away and you find out tied up next to the shady guy, tied up too. Move your chair in direction of the shady guy. After that, both of you escape and you have to find a door and go in. Avoiding the guards, go up and find a giant metal door. Use the Key Card to open it up. Go to the left to begin the final battle.

You must turn the crank to bring the shady guy up, while not letting too much art crash up to $1,000,000, making it a bit difficult since turning the crank is slow. Catch the pieces of art the "Black Widow" throws and when she gets mad, you have the opportunity to turn the crank and move the shady guy a little bit up, but be careful because when she gets mad she throws a bomb at you. Keep doing this a few times until you get the shady guy to the top, and he knocks her out. Then you will be back in the "Web Browser Internet Cafe" with the curator and she will tell you to go to the Museum Fantastique. When you get there, she is in the "Expressionism" area. Talk to her, and she will reveal that the museum is really the secret storage facility for the world's rarest art. Then, you get the island medallion!

The Common Room on Counterfeit Island is the Moldy Baguette Inn. It is located on Main Street. 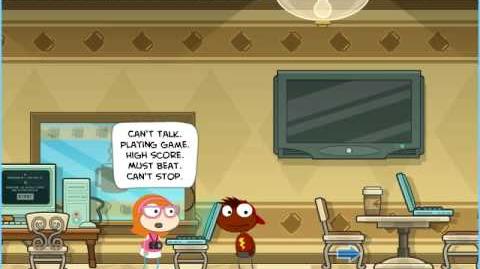