Count Bram is a character and a vampire on Vampire's Curse Island. He is one of the main antagonists for the island, other than Christopher and Cactus Von Garlic, who both appear in the Bonus Quest. 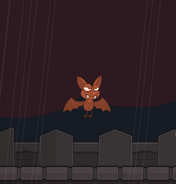 A vampire's cell, most likely Count Bram's.
Add a photo to this gallery
Retrieved from "https://poptropica.fandom.com/wiki/Count_Bram?oldid=119267"
Community content is available under CC-BY-SA unless otherwise noted.