The chupacabra is a cryptid. Although some descriptions of a Chupacabra appear as a green alien humanoid with sharp teeth, the Chupacabra encountered in Cryptids Island is more canine in appearance, with really sharp teeth.

The Puerto Rico Chupacabra appears as a large, teal-blue, hairless American bulldog-wolf hybrid with bony spikes all over its body and gigantic claws and teeth.

Head to Puerto Rico. Here, you'll find the same hot-air balloon man you helped earlier. Head all the way to the right until you see him standing with the farmer. Talk to the farmer and he will agree to lend you his jeep.

Now you have to drive to all the stars except the one somewhere in the middle, which will be visited later on. You will crash through some fences and maybe scare away some goats, but these do not matter. The farmers of the other farms tell you these important clues: The chupacabra attacks goats in groups of three or more, it only goes after spotted goats and seems to hang around Snaggletooth Rock.

The farm on the top left hand corner has a pair of wire clippers which are needed later. They are located on the right, on top of a rock face. Use the springy sticks to jump up and take them. The farm in the top right hand corner, a chicken farm, is where the farmer's brother is. He takes the seed, and says that the chupacabra attacked the farm. On the barbed wire fence, take the fur.

When you go back to Mews, he asks you to take a DNA sample. After the analysis, Mews confirms the fur is fake and that it is coyote fur.

When you go back to Puerto Rico, the farmer will decide to trap the chupacabra. Use the jeep to corral three spotted goats into the jaw-like part of Snaggletooth Rock. Do it slowly; there is no need to single out the spotted goats, just herd all of them.

Next, park your jeep at Snaggletooth Rock. Hide behind the rocks that the farmer hides behind, and the chupacabra will appear! The trap doesn't hold it for long, and it escapes, but leaves behind one of its teeth. Mews confirms the existence of the chupacabra. Also, the tooth can be reclaimed in exactly the same spot. 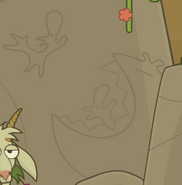 A depiction of the Chupacabra

Retrieved from "https://poptropica.fandom.com/wiki/Chupacabra?oldid=117782"
Community content is available under CC-BY-SA unless otherwise noted.