Poptropica Wiki
Register
Don't have an account?
Sign In
Advertisement
in: Islands, Charlie and the Chocolate Factory Island, 2012 Islands

Charlie and the Chocolate Factory Island

Charlie and the Chocolate Factory Island

Charlie and the Chocolate Factory

Zomberry Island
Charlie and the Chocolate Factory Island was the 31st island on Poptropica. It was released on November 15, 2012 for members, and on December 6 for non-members.

First, you will arrive on the Island in Main Street. Then you will go and talk to Charlie. Like taking candy from a baby! Then follow him to his house. Left of the house there  are three telephones. Click the left phone and you will receive a Silver Coin. Then, Charlie will leave his house to the candy store. There you must give him the coin. He will buy a Wonka Bar and ask you to open it. You will see a Golden Ticket, and suddenly, a bunch of Townspeople come in and try to get Charlie to sell them the ticket. You must slam into them over and over again until they are out of the way and Charlie runs out, with the townspeople following him. You then play a minigame where you have to run with Charlie and knock things over to slow down the townspeople. Finally, you lose them. The next day, you walk onto Main Street and discover that the townspeople have found a sixth Ticket. They chase it, but have no luck. Finally, it floats to the left. Now go to Charlie's house and chase the ticket around the buildings behind his house until you get the ticket. Now go back to the Factory Gates on Main Street, and they will open. Go in, and you will see Charlie, Mike Teavee, Violet Beauregarde, Veruca Salt, and Augustus Gloop, with their parents and grandparents behind them. Then he will take you and the kids in. When you enter, you will see the floor continues until it basically turns into a ramp. Willy tries to explain what to do, but the kids don't listen to him, and run around, until they run into the ramp and fall down the hole. Willy says that you, him, and Charlie need to get going to find the misbehaving children. He asks you to get his cane, and you go to the left and find Willy Wonka's Cane.

So everyone including Willy jumped out all over the factory! This is where the real fun begins so run down to the right and drop. There will be a meter with the different rooms on it. Click on the Chocolate room, and follow the arrow. There will be more arrows telling you where to go. Finally, you'll reach the chocolate room. Enter, and Augustus will see all the chocolate and will dive in the chocolate river. He will get stuck in a tube and you must save him. Turn the valve, and the pressure of the chocolate in the tube will accumulate, pushing Augustus Gloop up farther. He gets stuck again, however, so climb up one pipe and then to the next one, and push the valve there. He continues for a short while, but gets stuck again. Go to the right twice, and turn the next one. Augustus will go so far he shoots out of the room. The Oompa Loompas enter and take Augustus' mom to find him, while singing "Augustus Gloop, Augustus Gloop, the great big greedy nincompoop!" Follow them to the Fudge Room. Augustus is stuck in the Fudge tank, and you must turn the valve to shoot him out, landing him on a conveyor belt. Now press all the buttons in order. First you must save him from being crushed. Run across the top of the conveyor belt to the big peanut sign, where there will be a button on the platform. Press the button and it will stop the crusher. DO NOT press it too early though otherwise it will go back on and Augustus will be crushed. Next run down and there will be a red fire button which you should not touch. If you keep going there will be a blue fire button, which you should press. Keep running and you will pass the burning blue fire. Jump onto the platform after it and press the button. Then the flames will get shorter. Next run down and you will see a very big oven. Now press the big button on the control panel. That will shorten one flame and activate another one. Once Augustus passes the short flame, quick hit the button on the stand in front of the oven, making that flame go farther and shortening the next flame. It is a series of buttons in an easy pattern. Once you have finished, Augustus will come out and his mom will take him away, the Oompa Loompas following close behind.

Use the meter to go into the Inventing Room, and you'll see a giant Bubble Gum Machine. It creates what looks like the best gumball ever. Sure enough, Willy says it is! Violet grabs it and stuffs it right in her mouth. It tastes like... tomato soup? Next roast beef, and now, blueberry pie! But she savors her gum too long because she swells up and Violet turns VIOLET! She falls to the floor and can't get up, so the Oompa Loompas have to roll her out of the room, with her Dad following. You must follow them to the Juicing Room. Inside, Violet is stored with a bunch of other fruits, ready to be processed. She is released into a conveyor belt and she's about to face a bunch of machines. Connect the buttons on the menu so that they correspond to the pictures. There is the one that squeezes her back to shape. (WARNING: If you get this wrong, jumping is laggy) The Oompa Loompa's carry her out, her dad to follow.

Use the meter (arrow with the rooms) to get to the Nut Room, and when you enter, Willy will tell you that the squirrels are trained to get the nuts out of walnut shells. Now go grab the Walnut (that is located on the rack with the squirrels when you walk by Veruca you will automatically get it). Veruca wants one of the squirrels, but her dad doesn't want to get her one of Willy's squirrels and says don't be silly, but that doesn't stop Veruca from trying to get one! She goes and jumps onto the conveyor belt, but the squirrels knock her out! Then they push her to the sensor, which recognizes her as a "Bad Nut," so they push her into a chute. Now the squirrels knock Veruca's dad out, and push HIM into the chute! You probably know he would be a Bad Nut because he IS! The squirrels come after you, so you just throw yourself in there, but it just happens to be that you are a good nut, not a bad one like them. Now the trash conveyor belt is pushing Veruca, Veruca's dad, and more importantly, YOU, into a burning furnace! Go up and grab the Whipped Cream. Now pull the chain that's on the top level by the whipped cream and the old disposed gum lump will come out. Push it into the fan to stop it, and pull the chain to let another one out. Push it into the little tunnel and pull the lever. Now go down and get the Fizzy Lifting Drink. Now push the trash can into the nearest little tunnel, and pull the lever. A squirrel will start powering a machine. Now put the Walnut down and the squirrel will eat it, stopping the machine because nothing was running the wheel. The Oompa Loompas take Veruca and her dad out. Now take a sip of the Fizzy Lifting Drink and it will float you through the Exit tube that's located by the gum lump and whipped cream bottle.

The Best TV Show Ever

Go to the Television Room. Wonka's TV machine will transmit a chocolate bar to the TV at the far end of the room. Mike sends himself via Television to the big TV. Adjust the antennas so that Mike appears on the TV. The Oompa-Loompas will take him to the Gum Room. Here, you have to stretch him to roughly normal size. When you're done, Mike and his mom will walk away. Go to the Chocolate Room.

Charlie falls in the boo boo River. Wonka offers you a choice: save Charlie, or take the keys to the factory. Choose to rescue Charlie. Here, you make platforms with the Whipped Cream to get to the other end of the River. Being made of whipped cream, the platforms disappear after a while, so move fast. At the end, you'll pull Charlie up with Wonka's cane. Wonka gives Charlie the keys to the factory, and to you, he gives an invitation to visit the factory whenever you want, a lifetime's supply of chocolate, and the Island Medallion. And...Congrats!!!

But then, an Oompa-Loompa rushes in...

Little did you know that three of Wonka's enemies were busy stealing Wonka's prized secret recipes while you were rescuing the golden ticket winners. Wonka asks you to get them back. Click on the glass elevator to start the bonus quest game.

The objective of this game is to use the exhaust from the glass elevator to knock the three biplanes out of the sky. It takes three direct hits to take down a plane. The trick is that you need to refuel your sparkly exhaust. Oh, and you only have 40 seconds to knock down each plane. It's not too hard, but the trick is to stay on the tails of the planes. Don't go looking for sparkle fuel, it will eat up too much time. Follow the planes as closely as possible, veering off to grab sparkle fuel that's close. When the plane turns around, hit the space bar to shoot in front of them and drop the exhaust. Knock all three out of the sky and you win!

Interior design of the candy store. 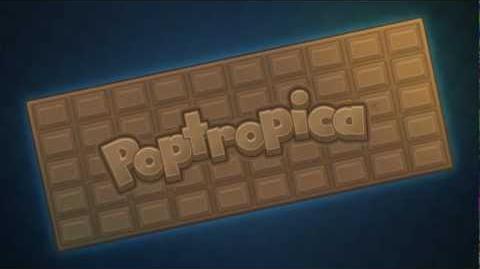 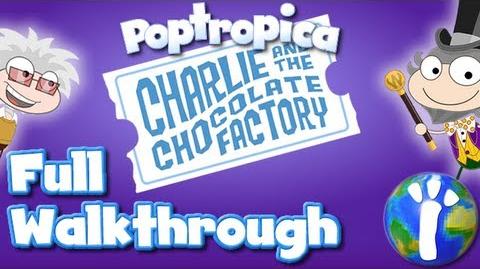