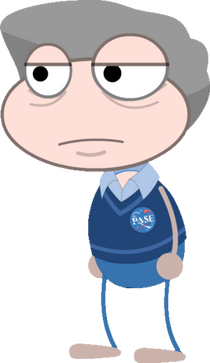 Male
Captain Gordon was a famous astronaut for PASE, who had to retire but returned for the "Meet an Astronaut" portion of the X-20 launch. He appears on Lunar Colony Island at the beginning of the island quest.

When he was an astronaut, Gordon was very famous during his first few launches into space, but eventually, he grew old and was forgotten. Then he had to retire, but he appeared at the X-20 launch as a "Meet an Astronaut" attraction.

For one portion before the launch, Captain Gordon participated in the Meet an Astronaut event, and left his memorabilia and belongings on a table. Later, a Poptropican stole the Ginger Ale he had on the table and used it to cure Hatcher (who was supposed to find Salerno) of his nausea.

Captain Gordon as an astronaut.

A modern-day Captain Gordon.
Add a photo to this gallery

Retrieved from "https://poptropica.fandom.com/wiki/Captain_Gordon?oldid=122463"
Community content is available under CC-BY-SA unless otherwise noted.