Male
Bucky Lucas is a Poptropican who resides on Reality TV Island.

Bucky's clothes are very dirty, there are faint bags under his eyes, and he has unshaved stubble across his face. He generally looks like he doesn't care about his hygiene, at least since quitting his job as an actor to live in the Wayside Motel as a recluse. He's wearing a white jacket with a filthy blue shirt underneath and a pair of white stained pants. Bucky also seems to be bored and not care about certain things.

He has black spiky hair with a shaved mustache and a sad expression. He wears a white overcoat and has a blue undercoat, with white pants that are all ripped.

He used to be an actor and celebrity. He was also the first person to be voted off of Reality TV. After returning home, he soon found that he was constantly followed by the paparazzi who refused to leave him alone. This therefore forced him to hide for years in a motel room.

Bucky will give you a special edition stamp when you send in your form to Reality TV Island. He lives in room 4B at The Wayside Motel. After you win the Reality TV show and you go back to room 4B, he will ask you for your autograph.

Bucky Lucas is in the Common Room for Zomberry Island. He is part of the movie playing in the cinema. It looks like a horror movie due to the fact that Bucky is screaming.

In Green Square Video Rental, there is a cardboard cutout ad for a movie called "Stuck In Detention" with Bucky Lucas in it. There is also a poster and billboard with him on it. The Poptop!cs magazine from Reality TV Island is also seen in the trash. Also, when your Poptropican takes a picture of Patient Zero, he/she shouts "Wow! It's Bucky Lucas!" to trick him into saying his name.

Bucky Lucas was seen on a cardboard advertisement playing Thor in an unknown movie.

Bucky Lucas appears on this island on a ripped newspaper on the ground. 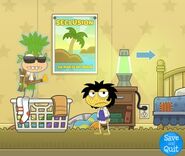 The Bucky Lucas prop on PoptropiCon Island.
Add a photo to this gallery

Retrieved from "https://poptropica.fandom.com/wiki/Bucky_Lucas?oldid=119406"
Community content is available under CC-BY-SA unless otherwise noted.