Astro-Knights Island
Big Nate Island was the 8th island on Poptropica. The whole island is hand drawn by the famous Lincoln Pierce, creator of the comic strip, Big Nate, which the island is based on. The island was released on February 12, 2009.

Nate's school is underfunded, and the structure is falling apart. In order for the school to be saved from demolition, a long lost time capsule must be found.

Arrive on Main Street. After you talk to Nate, enter the "Klassic Komix" and talk to Gordie. He will ask you to find the complete Big Nate Comic collection. Also, he will give you the first piece that is the title. Next, enter the "Pop-in Shoppe" and find the second piece of the Big Nate Comic near the couch. Get out, climb the electricity pole, go through the right power line and find the third piece. Go Outside the School and climb up the school to get the piece on the right side. Now go "Into the School", and get the piece on the right. Then go into the "Science Lab" and get the piece on the solar system model. Before you leave the lab, click on the beaker and hot plate to start an experiment. Put equal amounts of the blue and yellow chemicals into the beaker, heat it to the highest you can and you have made a Stink Bomb.

After that, return "Outside the School" and go right to "The Playground." Catch the piece floating at the top, then go in the "Kids Only" treehouse, win at "Go To Jail" and Nate will give you Peanut Butter Crackers. Go outside, and go right to the Puffin Point. Climb up the lighthouse, and get the comic piece at the top. Catch the Old Photo flying around next to the light house, then go back to Main Street and enter the "Photo Studio." Talk to the guy, and trade the Old Photo for the Scuba Gear. Before you leave, there's the last piece in the studio to the right. Then, put the Big Nate Comic together, return to the "Klassic Komix," talk to Gordie and he will give you a Pack of Stale Gum. Go inside the school, and go to Nate's messy locker. The combination will be on the comic. Open it up, and you will be hit by tons of stuff. After you recover, go back to the locker. Click on the pile of papers, and you will get a School Blueprint. Next, chew your gum, and you will be called into detention by Mrs. Godfrey. Put the Stink Bomb down, and Mrs. Godfrey will walk away and you will have opportunity to click on the file cabinet. A door will open. Go down, turn on the lights, get the Bell Clapper and exit the school.

Go back to Puffin Point, put on the Scuba Gear, and dive down to the Oyster Beds. Avoiding the bubble streams and get the Lobster Trap at the bottom. Go up, talk to Cap'n Salty, give him the Lobster Trap and he will give you a Lobster and the Jet Ski Keys. After that, go to the top of the lighthouse, next to the light, and use the lobster. He will crank the light so that the bird on top of the school flies away. Then go near Mr. Rosa, look through the telescope to the right and you will see a map under a rock. Then go to the jet skis, and click ride. Nate will come along and you must beat him by jumping over obstacles and avoiding bird droppings. When you get to Sealsaw Rock, put the seals on the seal-saw rock on the left. Then get the Map to Capsule and go back to the Outside of School, and go to the top of the school. Put the Bell Clapper in the bell, and ring it. Then, go to The Playground, and go to the empty ground where the talking girls used to be. Use the Peanut Butter Crackers, and Spitsy will dig up the time capsule. Open it up, and you will get a Pearl. The school is safe and then you will get the medallion! 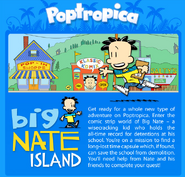 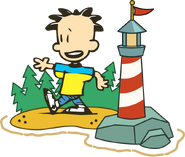