Balloon Boy is a minor character on Counterfeit Island. In addition to this, Balloon Boy appears on many other islands as a running gag. He is seen with his mother.

After you give Balloon Boy a green balloon, he will float up and away, and will leave you and his sister in horror. After viewing a quick cutscene, a man on Main Street will approach you and ask if you have heard about Balloon Boy. You should then enter the Internet Cafe, and talk to the Orange-Bearded Tourist, who is no longer occupied by his video game.

Balloon Boy has a cameo appearance on Reality TV Island, as is shown in the news on the TVs at TV World. Apparently, he is still floating around, and has not reached land yet.

During the sneak peek game, you could spot Balloon Boy. In fact, you can still occasionally see him next to the fortune hunter in the hot-air balloon.

Role in the Judy Moody Advertisement

If you climb up to one of the highest points in this ad, you can find the Balloon Boy silhouetted on the moon.

While searching the newspaper's archives computer for information, you can spot a box labelled 'Balloon Boy Articles', which is a reference to "Balloon Boy."

His name can be seen on the high score lists for the arcade machines in the museum's game room.

Balloon Boy is mentioned by the Story Generator 2000.

A figurine of him makes a cameo in Episode 2.

Role in the Balloons multiplayer game on the app

Balloon Boy appears on the start screen of the Balloons multiplayer game on the Poptropica app, floating to the left of the screen. However, his balloon is golden instead of green.

In the mole peoples' throne room, piles of various object are laying about, including Dr. Hare's mind-control helmet and a figurine of Balloon Boy from PoptropiCon.

Role in the Poptropica login screen

When the Poptropica login screen was revamped on September 25, 2018, it added a bunch of different characters and objects that float by in the background. Balloon Boy is among them. 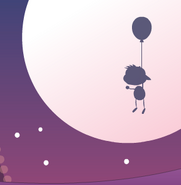 As seen in the Judy Moody ad

The start screen of the Balloons game on the Poptropica App

The figurine of him from PoptropiCon Episode 2. 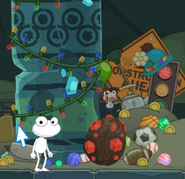 The figurine of him from Crisis Caverns Island.
Add a photo to this gallery

Retrieved from "https://poptropica.fandom.com/wiki/Balloon_Boy?oldid=117016"
Community content is available under CC-BY-SA unless otherwise noted.